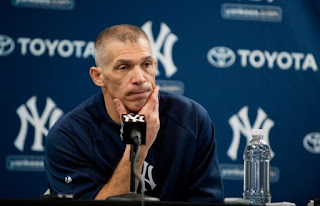 There's been plenty of talk about what the future has in store for upcoming free agents like Robbie Cano, Phil Hughes, and C-Grand, but there's another upcoming FA who's not getting a lot of attention, at least not until yesterday.  Joba Chamberlain's contract is also up after this season, and he made it pretty clear what his intentions are with his comments about his ability to pitch as a starter again.  Joba has been a full-time reliever with the Yankees since 2010, and at this point there's no chance they make the attempt to convert him back to a starter.  Joba's best chance to get that chance again is being signed by a team willing to at least try him out as a starting pitcher and his statements yesterday certainly seemed like Joba trying to set that precedent early and up his value on the open market.

The timing of Joba's comments can be called into question, and I did like both Joe and Cash subliminally pointing that out in their responses to Joba, but at the same time I can't really get on Joba for saying what he said.  He's 27 years old, hitting free agency for the first time in his career, and doesn't have much of a resume to show off in an attempt to get a big deal.  The Yankees and their handling/mishandling of the early years of his career are a contributing factor to that light resume.  Their commitment to letting him start was always weak at best, and even though his career starter splits aren't Strasburg-ian, a 4.18/4.27/4.17 slash over 221.2 IP in 43 starts as a 23/24-year-old is hardly a good reason to pull the plug.  Joba' has the right to speak his mind and do what he feels is in his best interests, same as the team has used him to fit their best interests.

Some are going to spin this as Joba not being focused on this season and not being focused on the team, but I don't see it that way.  If anything, I think this is a sign that Joba is more focused and feeling better than he has in years.  He's healthy again and he knows his opportunities to prove himself this season are going to be limited.  It's no fun thinking about the prospect of him leaving for another club, but if this is the first step towards a return of the flame-throwing, fist-pumping, post-K-screaming Joba, I'm OK with it.

Latest ZiPS Projections Not Kind To The Yankee Offense

Not to belabor the point, but the Yankee offense has taken a beating these last 4+ months.  Through players lost, lesser players added, players getting injured, and players recovering from injuries, the starting lineup on Opening Day could look drastically different than in recent years and drastically weaker as well.  Dan Szymborski of ESPN, master of the ZiPS projection system, attempted to project just how much weaker the lineup could be after the Curtis Granderson injury by running the latest projected lineup through a simulator.

It's an Insider Only piece, but there are only a few key things you need to know to get the point of this exercise.  One is that Szymborski left Derek Jeter out of this lineup projection, not an entirely unfair move with Jeter's Opening Day status still in the air.  The other is that the projected lineup looked like this: 1) Gardner, 2) Ichiro, 3) Cano, 4) Teix, 5) Youkilis, 6) Hafner, 7) Rivera, 8) Stewart, 9) Nunez.  You don't have to be a sabermetric genius to figure out that that lineup ain't much.  But just how bad does it project to be?  I'm glad you asked.