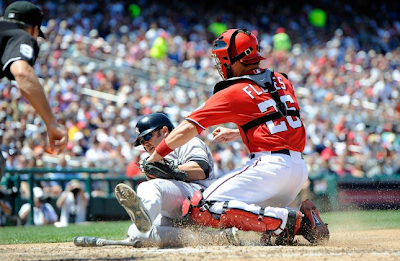 (The cause for concern.  Courtesy of Getty Images)﻿

Multiple reporters were quick to confirm that the Yankees were not in the market for an outfielder after Thursday's official re-diagnosis of Brett Gardner's elbow injury.  With Gardner only expected to be out for another 3-4 weeks, and Raul Ibanez and Andruw Jones doing a good job of holding down the fort in left for the time being, there really wasn't much of a need for the Yankees to be thinking trade.  But with Nick Swisher leaving today's game after suffering what's being called a "left quad contusion" on a play at the plate in the 6th inning, and his status being up in the air right now, the outfield situation might have to be revisited.  Before we all jump on FanGraphs and try to figure out which trade target best suits the Yankees, let's first examine what they could in-house to try to cover for the loss of Gardner and Swish, if it turns out he has to miss some time. 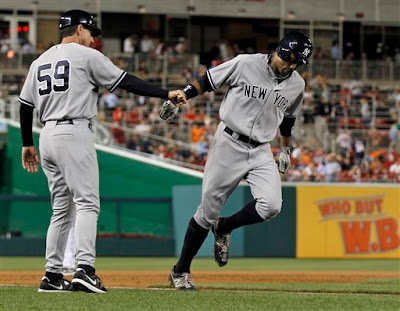 (Curtis doesn't get to do this a lot because he's not a home run hitter, you see.  Courtesy of The AP)﻿

Yankees and Nationals, 2 first-place teams going at it.  I don't think the Yankees have ever played the Nationals, and no, I'm not basing that on anything and I'm too lazy to look it up, but it was definitely not a clown series, bro.  The resurgent Phil Hughes was on the mound for the Bombers, facing off against the AL-to-NL transplanted and probable All Star Gio Gonzalez, so a pitcher's duel was in the cards.

- Gonzalez started off hot, striking out 5 of the first 6 batters to make an out in the game.  Hughes got 3 Ks in the first 2 innings, but also allowed 3 baserunners.

- The Yankees were the first to put a crooked number on the scoreboard, and they did it all with 2 outs in the top of the 3rd.  With Derek Jeter on second after a 1-out double, Teix walked and A-Rod and Swish hit back-to-back RBI singles to make it 2-0.  A-Rod stifled the rally a bit by getting thrown out trying to go first to third, but it was still a lead.

- Hughes almost gave it all back in the next inning, loading the bases with only 1 out and giving up an RBI base hit to Michael Morse, but got Ian Desmond to ground into an inning-ending double play on a first-pitch curveball.  Hughes getting groundball outs is always a nice bonus and there were none bigger last night than those 2.

- Both pitchers settled in after the 3rd, with Gonzalez working the next 3 innings in order and Hughes retiring the next 8 he faced after the DP in order.  Gio struck out 8 and Phil struck out 9, but Gonzalez was left in to face a batter to lead off the 7th and that was the difference in their final lines.

- Andruw Jones walked to start the inning, pinch runner Dewayne Wise stole second, was sacrificed to third, and scored on an infield single by Jeter.  Russell Martin also scored on a throwing error on the play, but the bigger blow came in the next at-bat, when Curtis Granderson lined a double to the opposite field that scored Robinson Cano and Jeter and made it 6-1 Yankees.

- Cody Eppley got 3 outs in the 7th, Clay Rapada worked a clean 8th (including Ks of Bryce Harper and Adam LaRoche), and Curtis Granderson: Non-HR Hitter hit a solo shot in the top of the 9th to put the game away.

- It was good to see D-Rob back out on the mound, even if he did give up a cheap run.  He got 2 groundball outs and finished with a K, though, and had his fastball sitting in its usual 92-93 range, so I would call it a good first appearance back.

- It's worth mentioning that last night was Joe's 500th career managerial win.  Congrats to him for that.