No Rush To Re-Sign Russell Martin 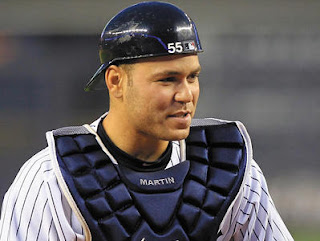 (Courtesy of Getty Images)
Russell Martin is all but guaranteed to be a Yankee in 2012 after he was among the group of players to whom the Yankees tendered contracts on Monday.  He was almost a steal for $4 mil this past season, rebounding from his injury problems to put up a .237/.324/.408 tripleslash, .325 wOBA, and 3.1 WAR in 125 games and finally putting an end to the Jorge Posada Catching Era.  And while his contract this year will be for more money, Martin is still going to be a bargain for the Yankees in 2012.  Already, though, there is chatter starting to leak out about extending Martin beyond this upcoming season, to which I must say "shhh."

There is no reason to even entertain any thought of signing Martin to a multi-year deal right now.  Yes, he's a solid all-around catcher still on the good side of age 30, but let's not forget that he's also just one year removed from being non-tendered by his former team thanks to his constant injuries and nosediving production.  2011 was a step in the right direction for him, but was still just one step.  Before we start talking about guaranteeing more years and more money to Martin, shouldn't we wait to see how he does in 2012?  Make sure that 2011 was not just a blip on the downtrend radar?  This is where his one-year status works to the Yankees' advantage.  It gives them another chance to assess his performance and health over a whole season and make an informed decision on where they'd like to go with him in the future.

The other benefit that Martin's one-year situation gives the Yankees is an in-house backup plan to any plans they might have to break in Jesus Montero and Austin Romine behind the plate.  There are questions about whether either of those 2 can be full-time catchers at the Major League level, and 2012 should be the time for them to show what they can or can't do.  If the Yankees decide Jesus or Romine can handle the job full time in 2013, then they aren't tied to Martin for more years and more money as a backup.  They can let him go and move on smoothly.  If the young'ns can't hack it, the Yankees have Martin right there available to re-sign, and after another year of seeing how he holds up.  He might cost a bit more at that point, but it's money that the team can be more confident in spending.

The situation with Russell Martin is a win-win for the Yankees any way you look at right now.  He provides stability and flexibility at the same time, and to extend his contract now would take that away.  Cash has been big on preaching patience the last few years and that's exactly what the Yankees need to be in handling Martin.  Patient.  Let him go out in 2012 and earn that new contract.
Posted by Unknown at 4:03 PM No comments:

Get Me Lou Piniella On Color Commentary, STAT!!

I missed it yesterday, but this story from The Daily News about Lou returning to the Yankees in 2012 as a ST instructor and YES commentator might very well be the best acquisition the Yanks have made this offseason.  It also is the latest reason for me to curse myself for ever moving out to Wisconsin and missing out on the convenience of having the YES Network any time I wanted it.

The stable of YES guys is already pretty strong.  I like O'Neill, I like Flaherty, I like Leiter, and I LOVE me some David Cone.  Adding Sweet Lou to that mix is like including that one last ingredient on Chopped that brings all the flavor profiles together.  He'll be the managerial yin to the other guys' yangs (gross) in terms of breaking down a game, he might be able to provide a little insight into what Joe is thinking when he makes some of his bizarre bullpen decisions, and he's still Lou Piniella.  He's a crazy old guy who's likely to still have some of that old fire in his belly.  I can't wait to hear him the first time he gets fired up about a bad play or bad call.  It'd be like watching a game with your crazy uncle.

I also wouldn't mind seeing him pull one of these on Michael Kay in the booth the first time they disagree on something: