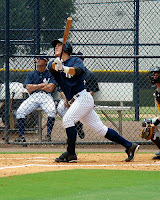 30) Tyler Austin- 3B- SS Staten Island
Drafted in the 13th round in 2010, Austin didn't see much playing time that year after breaking his wrist on a HBP in his 2nd pro game.  As a result, he started 2011 in Extended Spring Training and then was moved up to the GCL when that season started.  Austin thoroughly dominated the GCL and more than held his own for SS Staten Island after being promoted.  All in all, Austin put up a .354/.418/.579 tripleslash in 47 combined games at both levels along with 26 XBH and a perfect 18-for-18 on steals.

Austin is young (just turned 20 in September), big (6'2", 200 pounds), and athletic.  His calling card is his bat, which has already shown to be well above average.  He has shown some pop to all fields and an approach at the plate that's slightly more advanced than it should be for your average 20-year-old.  His final position has yet to be determined, but the Yankees appear to be settling on using him at the hot corner.  Austin possesses all the tools to become a very good pro, and with nothing left to prove at the lower levels, he'll get his first real test in 2012 with a full season at Low-A Charleston.  A solid showing there should have him shooting up a lot of people's rankings. 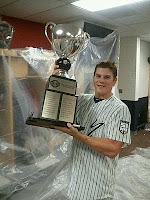 29) Branden Pinder- RHP- SS Staten Island
Pinder is practically cut from the pages of the "future big-time reliever" catalog.  He's a big body (6'3", 210), a power arm, and a 22-year-old college pitcher who was drafted in the 16th round of the 2011 draft.  After being assigned to SS Staten Island, Pinder became the team's closer almost immediately and he did not disappoint.  In 31 IP over 24 appearances, Pinder allowed only 24 combined baserunners and 4 ER, good for a 1.16 ERA and 1.94 FIP, while batters hit just .152 off of him.  And just for the sake of padding the kid's stat line, I'll also mention that he was a perfect 14-for-14 in save opportunities and had an 11.03 K/9.

Pinder uses his big body to bring the thunder, a lively fastball that sits mid-90s and above, but as a college pitcher he possesses some command to pair with that great stuff as evidenced by his sterling 1.45 BB/9.  He needs that command to be successful right now, as Pinder doesn't really have a solid secondary offering.  But like Austin, he's already proven that he's too good for the short season leagues and he should start 2012 in Charleston, where he needs to work on improving his offspeed pitches.  If he continues to put up these kind of lights out numbers, there's no reason for him to not be on the fast track up through the system, especially if he develops a reliable offspeed pitch. 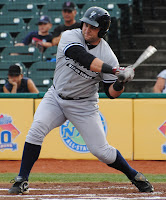 The lack of talk could be attributed to Roller being a college hitter, already 23 years old, and to him not being the most athletic cat on the block.  He's really only built to play first base, and could have a future as a DH on the horizon if he doesn't show the ability to play the field well at higher levels.  But Roller can hit, and has shown the kind of patience that the Yankees love (9.0% BB rate in High-A).  He might start the season in Tampa again, but should receive the bump to Trenton quickly.  He's definitely not the type to blow you away with mind-blowing peripherals or tools, but he's a solid hitter worthy of our attention in 2012 as he takes the next step.

27) Tommy Kahnle- RHP- Low-A Charleston
Like Pinder, Tommy Kahnle is a big power pitcher at 6'1"/220 who comes at you with the big, stinky cheddar.  A high-profile Division II pitching prospect in the 2010 draft, Kahle opened eyes immediately with 25 Ks in just 16 IP in 2010 for SS Staten Island.  Expectations were high for Kahnle in 2011 as he moved to Charleston, but his ascent hit a bit of a speed bump as he experienced problems with command (5.44 BB/9).  Despite that, Kahnle is still an intriguing prospect who could be fast tracked in 2012 if he bounces back to his 2010 form.

Kahnle's fastball sits mid-90s but can be dialed up to 97-98 when needed.  His usual secondary offering is a changeup, but the Yankees have been trying to get him to develop a slider, which could have been a contributing factor to his higher walk totals in 2011.  In 97 career MiL innings, Kahnle has 137 strikeouts, so the stuff is clearly already there as a foundation for future relief success.  And command issues or not, Kahnle did experience some bad luck in 2011 as his FIP was almost 2 runs lower than his 4.22 ERA.  He'll still be 22 when the 2012 season starts, so Kahnle has time to refine his skills.  If all goes well, we could see him finish next season in Trenton. 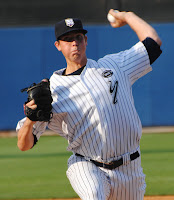 26) Nik Turley- LHP- High-A Tampa
Drafted in the 50th round out of high school in '08, 2011 was Turley's 4th season in the Yankee system and the first in which he finally started to put the pieces together.  22 years old, Turley is a long, lean lefty, standing 6'7" and 195 pounds.  In 15 starts for Low-A Charleston this past season, Turley posted a 2.51 ERA/3.53 FIP along with an 8.96 K/9 and 2.30 BB/9 in 82.1 IP, earning himself a late-season promotion to Tampa.  He only made 2 starts there with limited success, but he did enough for the River Dogs to make himself one of the more intriguing starters in the lower levels.

He doesn't blow anybody with his fastball, but his height and arm angle can give hitters fits, and Turley can maximize the value of both of those things by being a lefty.  He was considered a project and the Yankees have been patient with him so far, but he needs to develop some consistency with both his stuff and his command.  2012 will be a big year for Turley in terms of keeping himself in the ever-crowded mix of Yankee starter prospects.  Adding some bulk to his frame could go a long way in helping him take the next step to the higher levels.

Another Trade Possibility To Consider 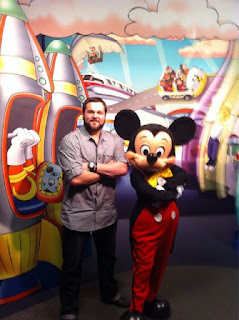 (No word on whether or not Joba's TJS rehab includes the same Mickey Mouse workouts he did in 2010)﻿
With all or almost all of what would have been considered "real" trade targets for the Yankees either already traded or re-signed, it's looking like a near certainty that we won't be seeing any new rotation arms for 2012.  But there is one guy on the Yankees' roster who could bring back some value in a trade and actually might make sense to move.  That guy is Joba Chamberlain.  I know he's still injured and won't be pitching until some time in the summer of 2012, but early reports have him ahead of schedule in his rehab, and at this point he might hold more value to the Yankees as a trade piece than as a piece of the 25-man roster.

The "Joba as a Starter" experiment has already been conducted by the Yankees, and despite there still being pleas from those in the Yankosphere to give it another go, the Yankees have never shown interest in reviving that option.  They're set with their 5-man rotation right now and have Hector Noesi on standby as the 6th starter if/when needed.  And with the emergence of D-Rob in the bullpen in 2011, it's suddenly become a little crowded at that inn as well.  Joba would be looking at another partial season behind Mo, two more years behind Soriano and multiple years behind D-Rob before he could be considered a serious contender for even a setup role.  And with the Yankees already having a stockpile of young arms who can step in and cover middle relief innings, Joba becomes less important as an insurance policy and space filler in that role.

And yet, by the time he is fully recovered from his Tommy John Surgery, Joba will still be a 26-year-old power arm with experience as a starter.  Last time I checked, the Yankees weren't the only team in need of starting pitching help, and Joba is dangerously close to becoming an afterthought in the Yankee organization for the reasons mentioned above, so why not try to stir up some interest around baseball and see if there's a market for him?  I'm not saying they SHOULD move Joba, but if Cash was trying to sell people on Francisco Cervelli earlier in the offseason, he might as well see what the market is, if there even is one, for Chamberlain.  They won't get the value in return that they would have a couple years ago, but you have to think Joba could bring back more than A.J.
Posted by Unknown at 8:11 AM 2 comments: