It's bad enough that Joe overmanaged a bit today and rested too many guys and it probably cost the team the game.  Seriously, you rest half of the regulars today and half of the regulars tomorrow and those 2 teams can still beat the Orioles.  You rest everybody and you roll out a JV lineup that kicked the ball all over the field and didn't do the damage offensively that they should have done against Britton and a garbage bullpen, and you end up just losing in extra innings.  But to make things even worse, this is the shit I have to read from A.J. Burnett after the game.

“I guess I kept them in as best I could.”

You guess you kept them in as best you could?  Are you fucking kidding me, bro?!?!  That might honestly be the weakest quote I've ever heard a professional athlete say in the history of organized sports.

First off, there's no guessing when it comes to a pitching performance.  You either pitched well or you didn't.  And your line today, A.J.- 6+ IP, 7 H, 4 BB, 4ER, 7 K, 3 WP- that's an example of not pitching well.  Secondly, you're not out there to keep the team in the game.  You're out there to fucking pitch well!  And lastly, this isn't the fucking Little League World Series.  Nobody is going to commend you for trying your hardest and doing the best you could.  And even if they were going to commend you, they certainly wouldn't do it if the best you could was 11 baserunners and 4 runs allowed in 6+ innings.  That's not the best you could.  The best you could would be 7 or 8 innings of shutout ball, because that's what you SHOULD be doing against the Baltimore Orioles lineup.

I read a comment like that, and I'm just at a loss for how the Yankees can even allow this guy to throw another inning for them this year.  Or next year.  Just let him go in the offseason and eat the contract.  He's a lame, weak, sadsack, hopeless mess and that quote not only proves it, but also proves that he doesn't even care.  Not even any serious discussion about what was happening on the mound, how he felt, what happened on the home run pitch.  Just "I guess" and "best I could."  What a fucking joke.

But hey, at least A.J.'s outing was a historic one today.  23 wild pitches ties the all-time Yankee record for most in a season. 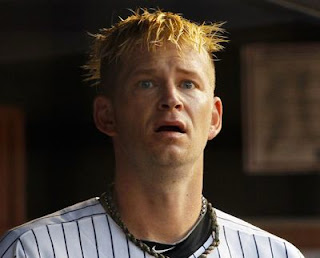 Posted by Unknown at 8:09 PM No comments:

Not quite.  Close, but not quite.

It's an understandable move by Joe considering how late/early last night/this morning's game ended, but also a bit surprising that he would sit this many guys while the team is in a close race for the division title.  I personally don't see why guys like C-Grand and Brett Gardner couldn't play today while Jeter, Cano, and Teix rest and then swap for tomorrow's game to keep the lineup more balanced, especially with The Human Meltdown on the mound, but whatever.  Not my call.  At least Joe was smart enough to put Jesus in the lineup to hopefully bless A.J. and his mechanics again.

(Lineup courtesy of LoHud)
Posted by Unknown at 11:51 AM No comments:

A Little West Coast Finishing Time On The East Coast

I can't imagine how much that must have sucked for the players last night to have to wait around until 11:08PM to start that game.  And I can't imagine how it must have sucked for the fans who weathered the storm (literally) to stay and watch the game.  But I guess all's well that ends well, and the Yankees got a 5-3 win behind 6 pretty good innings from Phil Hughes and back-to-back homers in the 7th from the new Bash Brothers, Frankie Cervelli and Brett Gardner.

There isn't much time to rest, as today's game is scheduled for a 1:05PM start, so expect that game to be a little sloppy too.