I'm not much of a gambler.  I've had 1 good day at the casino and 1 good day at the track in my life and both days ended with me leaving with 3 figures in my pocket.  That said, here are the money Super Bowl prop bets for Sunday:

I'll be cracking a beer the minute I wake up Sunday and I hope you all plan on doing the same.  Super Bowl Sunday is the 3rd best day of the year and it should be celebrated as such.  Rooting Seahawks but calling it Broncos 27-20.  Now onto the links!

- On Monday, SJK of NoMaas questioned just what, exactly, Brian Cashman's role as GM really is these days.

- Jason Cohen of Pinstripe Alley offered up his picks for prospects most likely to get called up in 2014.

- On Tuesday, el duque of It Is High... mused on what Joba and Robbie changing their appearances after leaving might say about the Yankee tradition.  I had never thought about that, but maybe there's something to it.  Maybe "Yankee tradition" doesn't mean as much to today's players as it did 15 years ago.

- On Wednesday, Mike Axisa of RAB laid out how and why Kelly Johnson has become a much more important part of the Yankee puzzle in 2014.  Somehow I don't think that was their original plan.

- Michael Eder of IIATMS/TYA made another case for going after Ubaldo Jimenez now that he's reportedly dropped his asking price.  You know the old saying...

- Michael Montrone of Yanks Go Yard wondered why the Yanks aren't showing any interest in FA pitcher Suk-Min Yoon.  My guess is it has to be something physical or injury-related.

- Derek Albin of Pinstripe Pundits looked back at last offseason and identified the biggest regret the Yankees should have given what they did this offseason.

- On Thursday, Chad Jennings of LoHud took a stab at predicting next year's top 10 prospects.

- William Juliano of The Captain's Blog broke down Keith Law's top 100 prospects to see what trends he could find.

It's the final football Sunday until September so we need something to get the blood pumping today.  "Doen" by Red Fang should do the trick.  It'd be exceptionally baller if one of the teams came out to this song on Sunday, but I highly doubt Goodell would let that happen.  No Fun League indeed.

This is it, the top 10.  The cream that's risen to the top of the Yankee farm system.  For the first time in a few years, it feels like the organization's top prospects are actually close to breaking into the Majors.  There's high-level pitching, a lot of high-level hitting, and a smattering of lower-level guys with major upside to balance things out.  From seeing some of the mainstream top 10 lists that have already come out, I can tell you that mine's pretty different and there are more than a few names on the AB4AR list that didn't show up anywhere on the others.  I stand by my selections though, and truly believe that these are the 10 best players in the Yankee farm system right now.  If you missed either of the first 2 days, here's Part I here and Part II here.  After the jump, the third and final part of the 2013-2014 AB4AR Top 30. 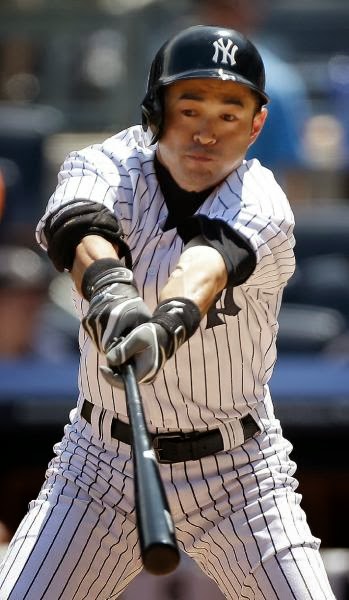 I really have to hand it to Keith Law.  Guys really knows how to upstage a small timer like myself.  Good old Keith decided it was a good idea to have his prospect week while I was having my prospect week, and he continued it yesterday by releasing his top 11 Yankee prospects list.  The list, for those without Insider access, is as follows:

I'm going to withhold all comments on Law's list, and instead use it as an introduction to the final third of this year's AB4AR Top 30.  You can see his top 10 right here and my top 10 will be coming out in a few short hours.  Law's been stealing thunder all week, but come 11 AM Central time we'll see whose Prospect Week and top 10 list is really #1.