I Just Don't Get It

Why didn't somebody tell Joe before the game tonight that the Cubs signed a new manager and he didn't have to try to manage his way out of town.  I can't even begin to dissect some of his moves tonight:

1) Starting Cervelli over Jorge at catcher

3) Intentionally walking the Rangers' # 7 hitter, the immortal David Murphy, to put more runners on base in a 1-run game when he had a tiring A.J. out there on the mound.

1)  Whether or Not The Lineup Will Wake Up Tonight

At this point there's no need to tally up the numbers again, we all know the Yankee offense has been pathetic except for the 8th inning of Game 1.  Tonight's starter for Texas, Tommy Hunter, presents the perfect remedy to cure a slumping bunch of sluggers.  He's a righty, which allows Teix and Swish to turn around to their power sides, he pitches to contact (only a 5.8% swinging strike rate and only 4.78K/9), and he pitches to a lot of power (1.48HR/9).  The long and short of it is, there are runs out there for the taking tonight.  The question is, can the Yankees shake off last night's ass plowing at the hands of Cliff Lee and start swinging the bats better?

His demeanor on the mound, his facial expressions, his body language, how quickly he works on the mound, his fastball location, his curveball command, how often he shakes off the catcher, how he works out of the stretch, how many times he throws over to first when a runner gets on.  Everything is important to watch with him tonight because he's been terrible all year and he hasn't pitched real game innings in a long time.  Joe is taking a big risk throwing his worst starter in a quasi-must-win game tonight, so every detail about A.J. is going to be that much more glaring.  It shouldn't be too hard to see if he's on early, but the real test will come when he puts runners on, which he will.  Can he finally sack up and get out of an inning or will it turn into another one of those strikeout, groundout, walk, single, walk, hit batters, double, single, double meltdowns that we're all used to seeing?

Like I said, Joe is taking a big risk going to his worst starting pitcher tonight down in the series when he could use his best starting pitcher who happens to have a great track record on short rest.  Joe knows this.  And he also knows how awful A.J. was this season.  With the game and a 2-game series deficit on the line, how much leeway is Joe going to give A.J.?  Given A.J.'s performance this year, Joe should rightfully yank him at the first sign of him falling apart, but since he announced him as the Game 4 starter before the series and stuck with that all the way through, I'm concerned that he will give A.J. more of a chance to get out of trouble than he rightfully should.  For Joe's sake, and for A.J.'s, he better not wait too long to get him out if things start to go south.

Not a big surprise here.  The latest in a long line of bad Brian Cashman pitcher signings is on the hill with a chance to redeem himself somewhat for a disastrous regular season and potentially swing the momentum back in the Yankees' favor by evening the series with their ace coming up in Game 5.  We've all seen Good A.J. and Bad A.J. enough to know the telltale signs of which one we're dealing with, so we shouldn't have to wait long to know if all of our prayers for Good A.J. have been answered.  Joe has stood by him since announcing he was going to get a start in this series and even went as far as to cater to A.J.'s fragile psyche and weaken his lineup by putting Cervelli in at catcher instead of Jorge, so A.J. has no excuses tonight.

I hate to be pessimistic, but given what he's done in the majority of his big moments as a Yankee, I have very little faith in A.J. tonight.  I want to see the Yankees win and I want to see A.J. pitch well, but all I'm hoping for is for him to not fuck up bad enough that the Yanks are completely out of the game.  Anything beyond that I would consider a miracle. 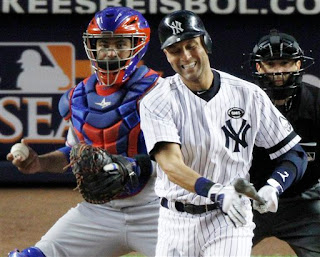 (Photo courtesy of The AP)
- Well that sucked, huh?  Really not much to analyze if you watched last night's game.  Andy was great again, save for the one cutter he hung to Hamilton in the first (which probably wouldn't have gone out if it wasn't hit at Yankee Stadium), but Cliff Lee was absolutely lights out, shutting down the Yankee lineup for what seems like the umpteenth time and doing it while appearing to exert all the effort with which one would loosen up before playing a rec league softball game.

- Andy appeared to be a bit sharper than in his ALDS start at the beginning of this one, and it was clear he was attacking the Rangers' righties away with back door sliders and cutters.  Unfortunately he wasn't getting the calls on the outside corner from home plate umpire Jim Reynolds and that contributed to him throwing an extra 10-15 pitches in the first few innings.  There were more than a few borderline pitches for Ks that a pitcher of Andy Pettitte's caliber and reputation usually gets, so it was a bit frustrating to watch him not be able to get a call here or there.

- But overall, Andy was fantastic again.  He had good live on his fastball, solid movement on his slider and curveball, and his cutter was devastating, breaking enough bats to make one want to do a double take just to make sure Mo wasn't out there.  All that added up to 12 swinging strikes on the night, a very good number for Andy, and only a handful of good swings that produced good contact by the Ranger hitters.  Shit, Josh Hamilton's home run was off the end of the bat, certainly not a no-doubt crush job like Cano's Game 2 homer.

- Unfortunately for Andy, Cliff Lee was as on as he's ever been last night and the Yankee lineup had no answers for him.  He gave them their best opportunities early in the count, exactly as I predicted, and there actually were some hittable pitches here and there but the Yankees couldn't put any good swings on them.  By Lee's standards, his first-pitch strike rate wasn't that great, only 16 of 27 batters faced and 2 of those were on first-pitch balls that the Yankees swung at, but he followed those up with a steady combination of fastballs, 2-seamers, cutters, and a hook here and there to virtually every part of the plate.  Generating 17 swings and misses will more than make up for a shoddy first-pitch strike percentage.

- About the only thing Lee didn't have working was his backdoor curveball, which he tried to sneak past a couple righty Yankee bats, and that was only because Jim Reynolds wasn't giving him that outside corner either.  But overall, I think it would be fair to say that Lee's strike zone was just a little bit more liberal than Andy's, especially up and down in the zone.  Not at it would have mattered if it wasn't last night.  Lee was just that good and he made the Yankees look completely awful at the plate.

- good job by Jeter taking some pitches against Lee and giving Gardner a chance to steal 2nd in the bottom of the 6th.  That was the first time the Yanks had gotten the leadoff guy on all night, and when it's your quickest guy you want to give him a chance to get into scoring position.  The strikeout right after the steal pretty much negated the effect of the steal, but still...

- I said to watch Teix last night and for that I apologize.  He was absolutely pitiful to watch against Lee.  With 2 outs and Gardner on 3rd in the 6th he got 2 very hittable pitches in his at-bat and couldn't do a thing with them, popping one foul and grounding the other to short to end the inning.  Something is still off with his timing at the plate right now and it's making him embarrassing to watch.

- But that was one hell of a dig on A-Rod's throw to get Bengie Molina in the top of the 7th. On the replay it showed Teix was already turning his head out of the way when the ball skipped into his glove and he was able to hang on.  Not many other first basemen in baseball who make that scoop, if any.

- Somebody explain to Ron Darling that CC being tapped to pitch Game 4 doesn't automatically mean A.J. is out of the rotation for the series.  He's sitting around talking about how CC on short rest is OK but the Yankees don't want to put Hughes and Pettitte on short rest also by throwing CC in Game 4.  Uhh, Ron, you could just pitch A.J. in Game 5 and keep Hughes and Pettitte on their regular schedules for Game 6 and Game 7, idiot.  That's what I said the Yankees should do all along, but I guess Joe and Cash aren't as big fans of the blog as I thought.

- I'm not going to get on Boone Logan and D-Rob for sucking in the 9th.  They probably looked out in the Ranger bullpen, realized nobody was warming, and knew Lee was coming back out in the bottom of the frame to close things out.  Tough to focus and be sharp when you know the game is already over.  Hopefully D-Rob's blowup doesn't carry over to tonight.

- Neftali Feliz, calm the fuck down with the tongue action on that chew, buddy!  It's fucking tobacco, not your girlfriend's pussy.  Pack a fucking lip and leave it there, bro.  Maybe spit every now and then but stop flicking your tongue around like you're trying to impress somebody.  I was getting really uncomfortable watching that last night in the bottom of the 9th.  He was like a lizard that was overheating in the desert sun or a hipster who smoked too much ganj and had horrible cotton mouth.  Somebody please teach him how to dip before tonight!

Play of The Game: Lee's strikeout of Jeter in the 6th

I'm sure Hamilton's homer and some of the runs in the 9th had higher WPA values, but Lee K'ing Jeter right after Gardner stole 2nd effectively wiped out the steal and put him back in control of the one inning where the Yankees had a legit opportunity.  The crowd quieted back down after that and Swish and Teix went quietly as well.  At a time when the game was still close, thwarting the Yanks' only real attempt to get back into it was huge.

Player of The Game: Cliff Lee

Well that's over and done with.  Now we can all sit around and chew our fingernails and cuticles to shit wondering if Joe is really going to stick with A.J. tonight and how A.J. will manage to implode this time.  FUN!!
Posted by Unknown at 8:18 AM No comments: