One of the things the Yankees were really hoping for this spring was a healthy one.  That was a 2-part goal, the first involving nobody suffering new injuries as a result of ST workout or game activity and the second being their large group of players coming back from injuries staying healthy and not suffering any setbacks.

It sounds like we've got our first setback in that second group and it didn't take very long for it to creep up.  According to Chad Jennings, outfield prospect Tyler Austin has been feeling some soreness in his right wrist, the same one that bothered him for most of last season.  It started up a few days ago and didn't go away, so Austin told coaches today and was held out of batting practice.  The plan right now is to let Austin rest it for a few days and see how the wrist feels then, but this obviously isn't an encouraging sign for how the wrist is going to hold up over the long haul once the season starts.

I hate to jump to the worst possible conclusion, but seeing as how I wasn't a fan of the idea to send Austin to the AZFL after the injury ended his MiL season early I feel like I can say it.  If this injury turns out to be something that requires surgery, and the Yankee medical staff missed it and thought the rest and rehab plan was the way to go, someone's ass should be fired.
Posted by Unknown at 1:04 PM No comments:

The Legend Of Tanaka's Splitter Grows

McCann said Tanaka's splitter "falls off the table." But, more importantly, his motion on the splitter is exactly the same as on fastball.
— Jack Curry (@JackCurryYES) February 21, 2014

Austin Romine on Tanaka's Splitter: "I had to turn around & ask what the pitch was. Never seen a ball move like that before. It’s special"
— Daniel Barbarisi (@DanBarbarisi) February 21, 2014

Some more fun facts about Masahiro Tanaka's splitter: It actually rotates clockwise and counter-clockwise at the same time, it was Tanaka's best man at his wedding, it was originally supposed to be involved in a program with CM Punk for Wrestlemania before he walked out on the WWE, and in some laboratory tests it's shown the ability to slow the spread of cancer cells.  Yes sir, it's going to be something when he starts throwing it in games... 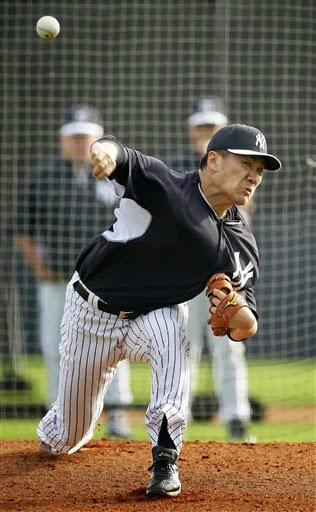 - The top 4 in the rotation all threw live BP yesterday and once again Masahiro Tanaka was the talk of the town, both by Austin Romine (who couldn't hit his splitter) and Brian McCann (who caught it).

- Brett Gardner and Jacoby Ellsbury both worked on their bunting with Rob Thomson.  Romine made some waves with an impressive BP session.

- Slade Heathcott won't play in any early spring games and he may not be ready at any point in ST as he works his way back from knee surgery.

- Bullpens of the day: David Herndon, Yoshinori Tateyama, Jose Campos.
Posted by Unknown at 7:07 AM No comments: