College football is back, baby!  Love it.  Means the NFL is 1 week closer to starting and I'm 1 week closer to going home for Yanks-Sawx.  It's the 110th Harley-Davidson anniversary this weekend, which is a HYYYYYYUUUUUUUUUUUUUGE deal in the Milwaukee area.  With 100,000 bikers cruising around the area and concerts by the likes of Kid Rock, Toby Keith, and Skynyrd going on, I've already made the decision to barricade myself in my apartment all day tomorrow with a case of beer and the full CFB lineup on my TV.  The girlfriend is obviously psyched about that.  Now onto the links!

- On Monday, el duque of It Is High... figured out exactly how many games the Yankees could afford to lose for the rest of the way and still have a realistic shot at the playoffs.  Suck on it, Marchand.

- On Tuesday, Mike Axisa of RAB made the case for why Monday night's start should have been Phil Hughes' final one of the season.  We'll see if Joe decides to rearrange the rotation this weekend.

- SJK of NoMaas put one last sad coat of perspective on Phil Hughes' season and his time as a Yankee starting pitcher.  Definitely not going to miss those.

- William Juliano of The Captain's Blog analyzed the rotation's month-by-month performance in 2013 and commented on how the poorer recent performance is hurting their playoff chances.

- Ben Lindbergh of Grantland looked back at Derek Jeter's defensive career with a breakdown of some of his best and worst plays.  Long read, but worth checking out.

- On Wednesday, Michael Eder of IIATMS/TYA identified the mechanical changes Andy Pettitte's made to fuel his recent turnaround.

- Bryan Van Dusen of The Greedy Pinstripes wondered if the Yankees as presently constructed have enough to overtake their competition in the Wild Card race.

- Hunter Farman of Yanks Go Yard reopened the case on Mike Mussina's HOF candidacy with Moose set to be on the ballot next year.

- On Thursday, Chad Jennings of LoHud broke down the remaining schedule to give an idea of how the Yankees have done against their remaining opponents and what they have to do to make the playoffs.

- Jason Cohen of Pinstriped Bible broke down the numbers on Chris Stewart's passed balls to show one area where he hasn't been worth his weight in gold defensively.

This week's jam is "Albatross" by Corrosion of Conformity.  Sneaky catchy guitar riff and a tune that I think the Harley crew would enjoy too.  Closest I'm going to come to actually bonding with them this weekend.

Nunez's MRI Clean, He's OK To Find A New Way To Get Hurt

The possibility of Derek Jeter being the only healthy shortstop on the 40-man roster no longer needs to be considered.  Eduardo Nunez had his injured knee MRI'd yesterday and the results came back negative for any tears or structural damage.  He's listed as day-to-day and for the time being the Yankees are covered as long as Jeter doesn't sprain or strain something else in the next few games.

More importantly than that, Nunez should be able to get healthy and back on the field in enough time to injure himself in ridiculous fashion one more time this season.  He's hurt himself taking a practice swing, he's hurt himself just running on a field, who knows what shenanigans will crop up next?  My money is on him accidentally kicking his batting helmet when it flies off his head running the bases, bruising his foot in the process, and then tripping over it and spraining his wrist when he falls.

Don't let me down, Eduardo.

(Courtesy of Pinstriped Bible)
Posted by Unknown at 1:09 PM No comments: 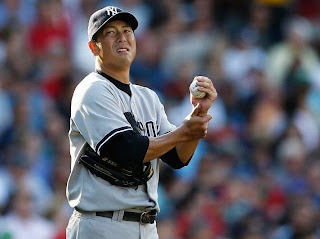 Ichiro Hitting The Wall Too

Let this be a lesson to all you pro-Ichiro Suzuki fans out there who were calling me a hater and giving me crap for ragging on the decision to sign him to a 2-year deal.  When it comes to late-30s, slap-hitting outfielders with no patience and diminished bat speed, I know what I'm talking about.  Ichiro's current batting line (.268/.301/.353, .286 wOBA) is almost identical to the .276 and .281 wOBA values he generated in his final year and a half in Seattle, and a lot of it has to do with the incredibly weak August he's had.

In 88 August PA, Ichiro is hitting .221/.239/.244.  That's a woeful .216 wOBA and 27 wRC+, just 2 BB and 2 doubles in a full month's worth of work at the plate.  I don't care who you are, what you've done, or how good you used to be, that flat out ain't cutting the mustard for 2 years and $13 million.  Reaching the 4,000 hit plateau is an incredible accomplishment and a testament to Ichiro's career greatness, but that greatness is in the past and the Yankees are still on the hook for one more year of this.  They made a decision against logic and the season-long sample size results have been exactly what the numbers predicted.

If Ichiro would just take a few more walks, he could maximize the value that his speed still brings on the basepaths.  He's shown no signs of doing that though, and the Yankees are going to be left to figure out how to get the most out of him.  If this minuscule production continues in September, there's no way Ichiro can be an everyday outfielder next year.