Can We Finally Stop Talking About The Whole "Yankee Fan Guy Who Caught Jeter's 3,000th Has To Pay Taxes" Thing?

If you follow AB4AR's Facebook page, and you damn well should be if you aren't, then you probably saw my comment on the whole Christian Lopez saga on Monday.  In my opinion, it never should have been a talking point for anybody to begin with.  The guys did what any REAL fan would do, give the ball back to the person who deserves it and not turn the whole situation into a bargaining/auctioning drawn out mess.  Then the whole tax situation on the gifts he received from the Yankees came up and everybody was up in arms again.  Well this should help finally put this thing to rest.

Lopez will receive five percent of the entire chain's [Modell's] Yankees merchandise sales for one week. Both Modell and Brandon Steiner, CEO of Steiner Sports, guaranteed Lopez at least $25,000 each....

In addition, Topps will produce a trading card featuring Lopez that will be included in sets later this year. Company vice president for sports Mark Sapir says Topps employees were impressed by Lopez's selfless act.  Sapir says Topps also will have Lopez choose the image for its 2012 Derek Jeter card." (courtesy of Fraud Sawx fans.com)

So there you have it.  The guy is going to have the taxes on all his swag covered and he's getting even more money and his own baseball card.  What I said was correct all along.  Lopez did the right thing and he has been handsomely rewarded for it.  That's how it should happen.  And do you know how I know that?  Because I'm a selfish dick who never does the right thing and I've never had offers from companies to pay my taxes or make a baseball card honoring me.  It's pretty simple.

Case closed on this non story.  Let's get back to baseball.
Posted by Unknown at 3:43 PM No comments:

Yankees At The Break- Looking Ahead 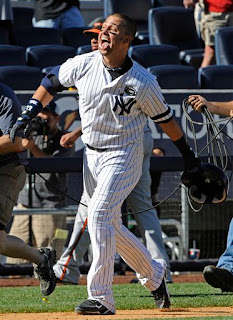 (Definitely want to see a lot of this in the 2nd half.  Courtesy of The AP)
With one more off-day before the season starts again, we know where we've already been so far this year and we know where we are right now.  So the only left to do is gun the DeLorean up to 88 and try to look into the future to see what the rest of the season has in store for the Yanks.

Thanks to bad weather, the Yanks, along with the Orioles, have played the fewest games in baseball at 88 and have had the benefit of their schedule so far being home heavy.  Of their 74 remaining games, they will play just 32 at home and 42 on the road.  Those remaining games include 9 against Bahhston and 13 against Tampa, their 2 main competitors for not only a playoff spot, but what playoff spot they get.  They'll be on the road for 6 of the 9 games against the Fraud Sawx and 7 of the 13 against the Rays, an uphill battle for sure but not a situation in which the Yanks are incapable of doing well, especially considering recent history.  Also included are a couple of potentially big series against Anaheim, one at home and one on the road.

The biggest thing for the Yankees to overcome in the 2nd half will probably be injuries.  The 15 players that have already landed on the DL match last year's total and they'll be without The Horse for at least a month, maybe 2, because of his recent surgery.  With older players like Jeter and Posada, Joe will have to get creative to give guys rests as they need them, even more so now that his bench depth is all but depleted.  But once again, Eduardo Nunez will get to show whether or not he's capable of shouldering an everyday load as he'll get the majority of time at third in A-Rod's absence.  Questions also still linger about how long Colon and Freddy Garcia will hold up, and whether or not Phil Hughes has fully regained his shoulder strength.  There are definitely more than a few potential injury landmines that the team needs to avoid.

Performance-wise, everybody in the lineup not named Curtis Granderson should be looked at to step it up a bit to make up for the hole A-Rod left in the lineup.  Mark Teixeira, specifically, needs to get the BA and OBP back up to match his gawdy power numbers, and I'm interested in seeing if the seemingly rejuvenated Derek Jeter is a mirage or a real rebound from his last year's worth of at-bats.  Continued production from Cano and Swish will be vital, and a rebound from Russell Martin's 2-month long swoon would be nice.  The rotation's effectiveness will hinge almost directly on Colon and Garcia's continued strong performances and the performance of the defense behind them.  That effectiveness can be bolstered by a true return to form from Phil Hughes.  CC and A.J. almost don't need to be commented on.  We know what to expect from them, for better or worse.

The most interesting part of the 2nd half is always the injection of new blood into the lineup, and the Yankees certainly aren't afraid to cannonball themselves into the trade pool to improve their team.  Cash is already on the record as looking for pitching help, both in the rotation and the bullpen, but the return of Hughes and the possibility of Rafael Soriano returning soon makes these issues a little less critical.  One potential target, the kind and friendly Francisco Rodriguez, is already off the market after the Mets traded him to Milwaukee last night.  A temporary replacement for A-Rod could also become a high priority if Nunez can't repeat the success he had filling in for The Captain, and RAB already took the liberty of breaking down some of the candidates.  Whatever direction they end up going, you can take it to the bank that the Yankee front office will be active as the deadline draws closer.

The last, and potentially most fun, thing to look forward to is roster expansions in September.  There have already been enough calls for The Jesus to come up and bring some much needed pop to the C/DH spots in the lineup, but will the team actually do it?  There's also the stable of young arms in Triple-A (Phelps, Warren, Mitchell, Whelan, Norton) that could get a chance to make a splash should injuries sauce rotational havoc, and let's not forget about Ivan Nova down there in SWB either.

It's already been a great season and it's only going to get more exciting (and more frustrating) from here.  There's a lot to look forward to as a Yankee fan looking at the next few months.  Hopefully it ends with another playoff berth and World Series run.
Posted by Unknown at 12:02 PM No comments:

The Hot Streak Is Over

So it looks like I was a little off with my predictions yesterday.  Oh well, you can't win 'em all.  I'm going to go ahead and lay all the blame squarely at the feet of Buck and McCarver.  Sweet Jesus those guys were awful last night.  Even for them.  I would have settled for Jon Miller and Joe Morgan.

Nice job by D-Rob coming in to cover for Beckett's sorry ass in the 2nd inning, though.  Now I just hope little Joshy ends up on the DL.  Then we'll see how many people want to criticize Jeter and Mo for pulling out because of injury questions.
Posted by Unknown at 9:15 AM No comments: