Time for a quick lap around the Yankosphere.  On your mark, get set, GO!

- Chad Jennings at LoHud has some details on Russell Martin, specifically his offseason workout-related tweets and the Yankees' thoughts about bringing him back next year.  The comparisons to Munson make it almost impossible to think that Martin won't be a Yankee in 2012.  Comments like that aren't just handed out.

- Lisa at Subway Squawkers wasn't as happy as some of us were to hear the Cash re-up news.  Her beef mainly lies in the inconsistencies in the Yankee brass' rhetoric, which I can respect.  But that still doesn't mean it's a bad thing that Cash is back.

- William at The Captain's Blog dishes a dose of perspective on Cash, reminding everybody of the success the Yankees have had under his watch.  It's kinda hard to argue with those numbers.

- On Freddy Garcia, Andrew Marchand at ESPNNY tries to make a case based on the low risk associated with Freddy while Jane Heller of Confession of a She-Fan argues against Freddy based on his "lightning in a bottle" season this year.  I don't know what side everybody else takes here, but I would support Freddy coming back as a last resort.

- Joe Pawlikowski at RAB has a very well-written piece explaining why the Mariners aren't going to trade King Felix, if anybody out there still thinks that's an option the Yankees should pursue.

- Vizzini at NoMaas brings up a very interesting hypothetical with his suggestion that the Yankees trade Ivan Nova now while his value is high to bring in another top-line starter.  Interesting premise, but would Nova-Noesi be enough to get the guy Vizzini wants?

- Mike Silva at NY Baseball Digest also discussed an interesting hypothetical, that being the Yankees looking to trade for Tim Lincecum.  I don't see that idea going anywhere, but I'd be willing to put a prospect package together if the Giants were serious about it.

- And last but not least, new colleague Matt Imbrogno at TYA joins the hypothetical trade talk by breaking down a Swish-for-John Danks trade.  That would be a good trade for both sides, but I think I'd rather go the route that Matt suggests at the end of the post than dump Swish.

Enjoy the rest of your Fridays and your weekends, Yankee fans.  Make sure you stock up on beer for all the college football games tomorrow.  I know that's what my eyes will be glued to.
Posted by Unknown at 1:59 PM No comments:

Hey, How Are The Mets Doing?

Anybody heard?  What are their big offseason plans?  Have they already made an offer to Jose Reyes to try to keep him around?  Do they have any big pitching targets?  What are they doing this offseason??

"After Citi Field produced the third-fewest homers in the National League last season, Mets officials decided to reduce the in-play surface area by 2 percent, general manager Sandy Alderson said. The playing surface beyond 300 feet from home plate is being reduced by 5 percent." 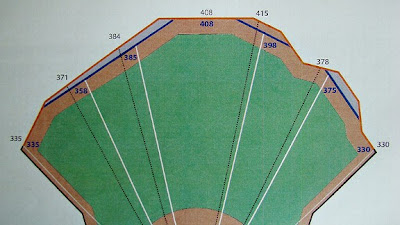 (New dimensions shown in blue.  Courtesy of The Mets)
"[The] dramatic dimension changes to Citi Field ... should mean the home team belting more than 25 additional home runs in 2012."

Good to see that nothing has changed over in Met Land even with Omar and Crazy Jerry gone.  They're still just as incompetent as ever.  The Yankees address their offseason needs by picking up the options on 2 of their more productive offensive players, one of them a Silver Slugger Award winner, re-signing their GM, and extending their ace who happens to be one of the best starting pitchers in baseball all in about a week.  The Mets address their needs by making their field dimensions a little closer to Little League standard to help their crummy batch of Quadruple-A-caliber players.  It's brilliant.

Another great day to be a Mets fan.

(Quotes courtesy of ESPNNY.  Read the whole article for a few more laughs if you have the time.)
Posted by Unknown at 7:59 AM No comments: