Sometimes when I'm pulling onto a road when there aren't a lot of cars around, I like to time my pull out with the passing of the car that is driving by.  I'm always secretly hoping they see me do that and think to themselves that they're being tailed, that I'm some kind of hitman or black book government operative tasked with following them and their every move and then either reporting back to HQ with my intel or taking them out.  I'm secretly hoping that because that's usually what I'm thinking about in my head when I pull in behind them, and I'm thinking that because I am a perpetual 12-year-old.  Between my fake black ops missions and always texting, I am the worst person to drive with.  If I ever offer you a ride, you'd be smart to turn me down and take the bus.  Now onto the links!

- On Monday, el duque of It Is High... let it be known that he doesn't want to see a repeat of 2012's "rotating aging veteran" approach to replacing C-Grand, but also didn't exactly throw his support in the corner of the young guys either.

- On Tuesday, Chris Mitchell of Pinstripe Pundits looked up some historical comparisons to try to predict Eduardo Nunez's future as a shortstop.  I'll let you decide for yourselves, but I didn't find them encouraging for a guy whose rep has been "Jeter's successor" at times before.

- EJ Fagan of TYA preached the idea of being sellers at the deadline if the Yanks are out of playoff contention, and put together an interesting list of trade comparisons for some of their bigger trade chips.

- Benjamin Orr of Yanks Go Yard discussed expectations for Mariano Rivera in his comeback/final season, and gave his own stat line prediction for Mo.

- On Wednesday, Mason Stark of Pinstriped Bible explained why he doesn't go to the new Stadium, and the influence that the shift in Yankee organizational priorities had on the decision.

- Rilwan Ameen of Bronx Baseball Daily looked at the unfamiliar position the Yankees find themselves in heading into this season.  It's a worthwhile point, but I don't think I'd go far enough to call a team with a $200 million payroll "underdogs."

- On Thursday, Mike Axisa of RAB continued his stellar spring "Hot .GIF Action" series with a collection of the best and worst of the always erratic Dellin Betances.  Sweet fancy Moses, those last two pitches sucked.

- SJK of NoMaas mused on the idea of a Ronnier Mustelier or a Zoilo Almonte making the Opening Day roster.

- Chad Jennings of LoHud updated the starting catcher battle by talking about the night-and-day different starts to camp for Cervelli and TCS.

- Stacey Gotsulias of IIATMS gave her two cents on the ongoing Eduardo Nunez saga and where she thinks he's the best fit.

This week's Friday Jam is "Green Machine" by Kyuss.  That song has been in and out of my head consistently for the last month and I finally saved up enough pennies to buy "Blues For the Red Sun" on iTunes this week, because I never EVER illegally download anything.

Enjoy your weekends, everybody.
Posted by Unknown at 4:02 PM No comments: 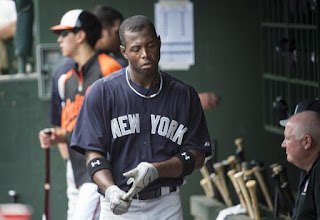 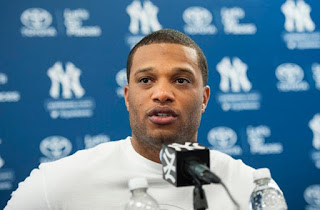 More importantly, it's another big sign that the Yankee front office has smartened up when it comes to doing business on a budget.  Waiting until Cano hit the open market was going to force them to shell out more money and more years if they really wanted to keep him, and chances are that's still what's going to happen with Boras at the controls.  But by continuing to negotiate with Cano and make contract offers, the Yankees get themselves a bigger headstart again their free agent competition, show Cano they are serious about wanting him back, and give themselves a better chance of working out a deal closer to what they're comfortable with than they would have had if they waited until October/November to start talking.