Here's what you should have had to read yesterday:

* Mark Teixeira- C: It was a whole season of alls or nothings for Teix at the plate, and even though his 33 HR and 108 RBIs make you think he was productive this year, if he had any kind of consistency he probably would have hit 20 points higher and had a chance for 40/130.  Teix made the most of his hot streak to put up some good peripherals but let's be honest, a .256/.365/.481 year is just not good enough from Teix.  He's going to win another Gold Glove at 1B, and maybe I'm being too harsh here, but his down year at the plate and no-show in the postseason again even before the injury make this an underachieving year for Teix in my book.

* Derek Jeter- C-: It was a rough year for The Captain as we all were witness to the beginning of his end as a productive full-time player.  The .240/.340/.370 line is bad enough, and the 111 runs scored are more of a testament to the guys hitting behind him than to how well Jeter hit, but perhaps worst of all were the constant images we were not used to seeing.  Jeter showing no patience at the plate, Jeter grounding everything to the left side instead of going the other way, Jeter almost never coming up in the clutch, Jeter cheating on fastballs and still swinging late on them, and Jeter looking almost statuesque on everything hit to his left or right at shortstop.  It was just not a good year for The Captain.

* Alex Rodriguez- B-: Like Jeter, A-Rod had a down year this year, but he was still able to be very productive even in a "down" year.  Despite a career-low .270/.341/.507 tripleslash, A-Rod still managed to swat 30 homers and drive in 125.  His numbers with RISP and the bases loaded were terrific and allowed him to still be a dangerous presence in the lineup despite all the injuries and age-related decline he dealt with.  His range is also limited at 3rd, but on the balls he did get to A-Rod played Gold Glove-caliber defense.  He couldn't replicate his 2009 postseason, but I still call this year a success for The Horse.

* Jorge Posada- C+: Another player of the Yankee elder statesmen not aging so gracefully, 2011 was another year of injuries, inconsistency, and rapidly-declining defense for Jorge.  At this stage in his career, he's basically just a pitch back behind the plate, and he probably couldn't throw me out trying to steal 2nd.  But he can still work counts (.357 OBP) and still has some pop (18 HR, 57 RBIS, .454 SLG), so his numbers in fewer at-bats stack up well against his competition.  At DH next year, he should be a more productive bat.  It's just a matter of Jorge swallowing his pride and accepting the role change.

* Nick Johnson- F: Just terrible.  Got on base but didn't hit or field worth a lick when he was healthy.  And didn't stay healthy for more than 5 fucking minutes.  Definitely a waste of money on the signing and definitely looking forward to not having his ass back next year.

* Brett Gardner- B: An overachieving year for Gardner (even with the weak 2nd half) that probably saved the Yankees a bunch of money on a Carl Crawford contract offer.  Gardner hit well enough and got on base thanks to great patience at the plate (.277 BA, .383 OBP) and utilized his speed to hit 7 3B, steal 47 bases, and score 97 runs from almost exclusively the 9-spot in the lineup.  Combine that with outstanding defensive numbers in the outfield (21.9 UZR, 27.9 UZR/150) and Gardner was worth 5.4 WAR in a solid first full-time year and hopefully a predictor of future success.

* Curtis Granderson- B-: Early-season struggles, injuries, and swing rebuilds aside, Curtis Granderson did manage to produce when he was healthy.  Even with the .247 BA, he still posted an OPS close to .800 (.792) thanks to improve patience and solid power numbers.  48 of C-Grand's 115 hits were XBH and he put up positive defensive UZR numbers as well.  So for as much crap as he took from the media and fans before turning his season around, Granderson still posted a 3.6 WAR and was the Yankees' 2nd best postseason hitter behind Cano.  Something tells me 2011 could be a big comeback year for C-Grand.

* Nick Swisher- A-: The continued evolution of Nick Swisher as a baseball player took a huge step this year as we were witness to a new, less patient, more compact swinging Nick Swisher that rocked balls all over the ballpark while continuning to play better than expected defense in right field.  Swish posted a career high .288 BA to go along with an .870 OPS, 29 HR, 89 RBIs, 163 H, 91 R to earn himself his first ASG berth.  And while some people couldn't, I'll let Swish's 2nd straight rough postseason go since nobody else hit in the ALCS and he was a 4.1 WAR player in the regular season.
Posted by Unknown at 2:57 PM No comments:

I know I was supposed to put up the lineup report cards yesterday, but I was a lazy forgetful asshole.  So to make up for it, here's a picture of Minka Kelly.  Even if Jeter doesn't get the contract he wants, he's still got this to fall back on. 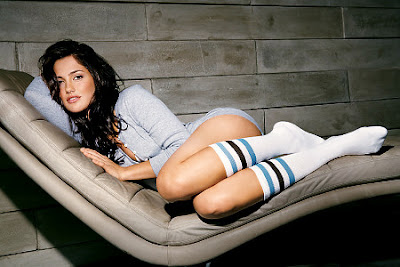 The lineup reports will be in this afternoon.
Posted by Unknown at 9:11 AM No comments: