Total IP added this offseason to replace them: 0

The bullpen was an area of need this offseason before yesterday.  The Yankees were going to be without the greatest closer in baseball history for the first time in almost 20 years and they still hadn't committed to his internal heir apparent as the actual heir to his throne.  After yesterday, it's become a much bigger area of need.  With Logan going to Colorado and Joba to Detroit, the Yankees are missing almost a third of their total bullpen work from this season, 30.36% to be exact, and they haven't made any progress on replacing any of it.

They have internal options, but the plan was always to sign at least 1 veteran arm to pick up some of that 145-inning slack.  With some big names already off the board and a few more in serious talks with other teams, it might be time to start ramping up efforts to replace those innings.
Posted by Unknown at 1:30 PM No comments: 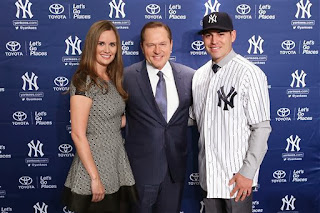 The Yankee formally introduced their second big free agent acquisition yesterday, holding a press conference for new center fielder to be Jacoby Ellsbury.  As always, there were a few moments of note.  If you were stuck at work like I was and unable to watch, here are the highlights:

- Ellsbury will wear #22, the same as some pretty significant Yankees before him wore.  He said he decided on 22 because all his other previous numbers he wore in Boston and in college - 2, 46, 23 - were either taken, off limits, or retired. Yeah, that'll happen when you come to this team.

- As with Brian McCann, Ellsbury said he spoke to a few current players before making the decision to sign.  Specifically, he said Derek Jeter and Mark Teixeira reached out to him to sell him on playing in New York.

- He played through a compression fracture in his foot in the postseason, but Ellsbury said he's fully healthy and able to have a normal offseason workout program.  When asked about his past injuries, Ellsbury said, "“I play the game hard.  I play the game, I feel like, the right way. That’s what I take pride in, going out there each and every day and giving everything I have. It was just two unfortunate things."

- Cash on the idea of Ellsbury's power playing up in YS3: “I’m not looking for that.  I certainly don’t want him to change his approach because of the ballpark."

- Joe's big comment to Ellsbury: "You're no longer a thorn in our side, you're a flower in our clubhouse."  Aaaaaaawwwwwwwwwwwww!

There's 2 officially in the fold for next year.  Time to get that Beltran physical over with and get him introduced too.
Posted by Unknown at 9:00 AM No comments: