Big old batch of links this week.  Let's get right into it.

- On Monday, Jimmy Kraft of Yanks Go Yard, seemingly in anticipation of the public outcry to come, looked at some of the traditional slow starters on the Yankee roster.

- George Szabo of Gutty Gritty Yankees looked at a potential inter-divisional matchup problem between the Yankee lineup and Toronto's lefties.

- Greg Corcoran of Bronx Baseball Daily previewed the newly named Scranton/Wilkes-Barre RailRiders.  Not a lot of sexy names there, but it should be a strong team.

- On Tuesday, EJ Fagan of TYA argued against the idea of extending Robinson Cano now, believing it's a better strategic move to wait and see how 2013 plays out first.

- El duque of It Is High... wondered if the Houston Astros moving to the AL West will hurt the Yankees' wild card chances.

- Mike Axisa of RAB pointed out just how important Eric Chavez was to the team last year and how much more important he could have been this year.

- On Wednesday, William Juliano of The Captain's Blog pointed out the flaws in Jeff Passan's piece about the Yankees being poor developers of pitching in the last 5 years, and showed how they've actually been pretty good at it.  I was hoping to touch on this today, but William beat me to it and said everything better than I could have.

- Egon Spengler of NoMaas mused on what David Phelps could have in store for an encore in 2013.

- Matthew B of Yankees Fans Unite correctly pointed out that the rest of the AL East has its own questions heading into the season, an important thing to remember if you're bumming on the Yankees.

- Steven Goldman of Pinstriped Bible picked through other teams' roster depth to identify possible trade targets who could help the Yankees.

- On Thursday, Chad Jennings of LoHud used his morning notes to give unfamiliar fans an introduction to prospect Corban Joseph.

- Derek Albin of Pinstripe Pundits, also doing a week-long look at the ST roster battles, examined the 4th OF/Righty DH competition and came to conclusions very similar to my own.

- Bryan Van Dusen of The Greedy Pinstripes kept their string of prospect interviews going by talking to Ty Hensley.  I can't say I'm a fan of his at-bat song choice...

- On Friday, Tamar Chalker of IIATMS released their official Top 30 Prospects rankings for 2013.

This week's Friday Jam is "Hey Joe" by The Jimi Hendrix Experience, arguably the greatest song about the worst subject matter in the history of music.  I read that the BBC had to apologize earlier this week for one of its stations playing this song after doing a news report on the Oscar Pistorius case.  Pistorius is obviously a piece of garbage and there's nothing cool about murdering your significant other in cold blood, but let's get one thing straight.  Nobody ever has to apologize for playing "Hey Joe" on the radio.  Ever.  That song is the biz and I sure as shit ain't apologizing for playing it now. 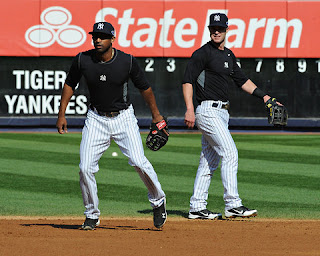 Phil Hughes And The Art Of Not Being Labeled Injury-Prone

Phil Hughes has been given a lot of different titles and descriptive identifiers in his professional career.  From "can't miss" and "surefire" to "uncertain" and "inconsistent," he's pretty much run the gamut of labels given to top prospects in his still short Major League career.  One thing he hasn't been called, however, is injury-prone, which comes as a bit of a surprise given his long track record of injuries, the latest of which could put him out of early spring action for a couple weeks.

Take a gander there.  That's not a short list by any measure, basically one injury for every year Hughes has pitched in the Majors.  For most guys, that's enough to get the label slapped on them after just 3 or 4 years, but Hughes has spent 6 pitching at the Major League level and has still yet to have his injury problems questioned as much as his offspeed pitch selection, fastball command, or future ceiling.  How can that be?