Calculate the velocity, V, in relation to the trajectory, T, in which G, gravity, of course, remains a constant. 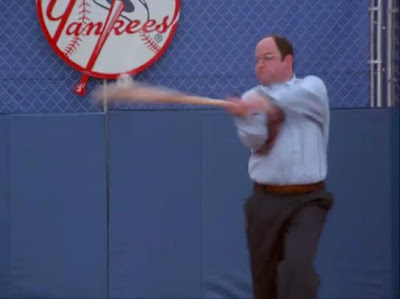 It's not complicated.
Posted by Unknown at 6:31 PM No comments:

Umm, Is That An Official Diagnosis? 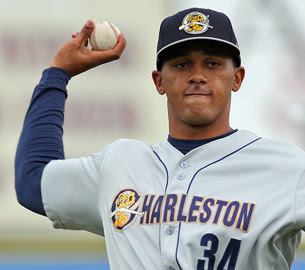 "Yankees GM Brian Cashman said that top prospect Manny Banuelos is on his throwing program, as he continues to recover from what the Yankees have described as a sore elbow. Jose Campos ... hasn't started throwing again yet. He also has a sore elbow.
'They will both pitch this year,' Cashman said.

When asked if there is any long-term concern over their elbows, Cashman said, 'I hope not.'"

I touched on this briefly on the AB4AR Page yesterday, but what kind of an answer is that?  You hope not???  These guys are the organization's top 2 pitching prospects.  They haven't pitched in months after being shut down with elbow injuries, giving them plenty of time to be tested, evaluated, diagnosed, and rested.  And after all that time, as they start to get ready to throw and pitch again, you're basing your long-term prognosis on the condition of their pitching elbows on HOPE???

I hate to be a Debbie Downer here, but the Yankees might as well just pencil ManBan and Campos in for Tommy John Surgery right now.  Maybe they can get a group discount if they book the appointments at the same time.
Posted by Unknown at 10:30 AM No comments:

Things I'm Looking Forward To In The Second Half

We're just one day away from meaningful baseball games starting up again, and that time can't pass quickly enough.  It's been absolutely brutal without them this week because there is NOTHING on TV.  I barely paid attention to the HR Derby on Monday, started tuning out of the All Star Game around the 3rd inning and turned it off completely by the 5th on Tuesday, and don't even get me started on how stupid the ESPYs are.  The Yankees are coming back into my life at the perfect time, and as some people say, the season REALLY starts now.  There are plenty of obvious second half storylines to follow, like the trade deadline, Andy's return, September call-ups, and the always fun start of the magic number countdown, but there are plenty of other things I'll be following as well.  Like what, you might ask?  Well, how about...