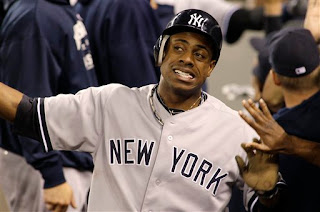 As far as timing goes, Curtis' slump couldn't have been better and worse.  His drop in production hasn't affected the Yankees' ability to win games.  In fact, they've gone from 2nd to 1st in the division since my MVP debate post and currently sit just a handful of games from locking up another playoff berth.  The timing of the slump coinciding with the Fraud Sawx completely falling off a cliff and the Rays not doing enough to make a dent in the Yankees' cushion on them was a nice stroke of luck for the team.  But on an individual level, this slump could very well cost Curtis the AL MVP.  Jose Bautista still has the gaudy numbers that voters like, and everybody and their mother is jumping on the Justin Verlander bandwagon, so it's probably going to take a mighty big rebound over these last 2 weeks for C-Grand to put himself back in the voters' minds.

But what changed in September to cause this slump?  And how can C-Grand right the ship to head into the playoffs swinging the kind of bat he had been all season up until now?  Besides the low OPS and wOBA values, the thing that stands out most to me in September is the wide gap in BB/K ratio.  We all know that Curtis is a bit of a K machine, but his high BB% and incredible power numbers more than make up for that.  This month has been a different story.  Curtis already has 15 Ks this month and only 4 BB.  The eye test would say that he's been swinging at more pitches lately and not working himself into favorable hitting counts, and those BB/K totals would support that.

In addition, the contact Curtis has been making in September hasn't been nearly as effective as it's been all season.  His BABIP for this month is only .250, by far the lowest he's put up in any month.  His September LD% of 12.1% is a season low and his GB% of 45.5% is a season high.  Less solid contact and more balls on the ground are certainly a solid formula for low BABIP, and would support the theory of Curtis swinging more and putting himself in bad hitting situations.  It's a case of a couple different things all happening at the same time, and when these things happen to any hitter, it's going to spell a slump.  And let's also not forget that Curtis has had quite the workload this year.  He's played in 145 of the team's 148 games this season, and the recent scheduling debacles probably haven't done him any favors in terms of being able to rest a/o devote a little more time on the side to work with Kevin Long.

Given that this is the first time we've seen a prolonged slump from Curtis this year, I don't think this current situation is anything to be alarmed about.  We haven't seen him abandoning the swing mechanics that brought him this success and he doesn't seem to be guessing at the plate.  He's just not taking as many pitches as he has been all year to draw walks and favorable counts and he isn't making great contact on the pitches he is hitting.  With the off day today and surely more rest ahead as the regular season winds down, there's plenty of time for him to right the ship before the postseason.  And if all else fails, there's always Dr. Long.
Posted by Unknown at 2:33 PM No comments: