Might actually take a step up in the world of blogging this weekend.  No I'm not talking about IIATMS/TYA's re-affiliation with ESPN, although that doesn't hurt either.  I'm talking about finally buying a real, legitimate computer chair for my apartment.  I do the bulk of my blogging from the office but I do some writing at my apartment and a lot of research there and almost everything I post on the weekends is done from there.  And I do it all from this old, heavy, practically antique chair that I got from my parents' friends when I first moved out to Wisconsin.  It was fine at first, when I was still in my mid-20s and in reasonable shape, but now that I'm old(er) and fat(ter) it's a nightmare to sit in.  My back starts to hurt after a while, my legs start to ache after 30-40 minutes, it's horrible.  So one of the big things on the weekend to-do list is to get my ass to an Office Max or something and try out some nice computer chairs because I'm to the point where I need some support and some ergonomic goodness and I almost can't take myself seriously as a blogger still writing from that chair.  Now onto the links!

- On Monday, el duque of It Is High... criticized MLB's continued efforts to become more like the NFL and screw the Yankees in the process.

- On Tuesday, Greg Corcoran of Bronx Baseball Daily profiled pseudo-prospect Peter O'Brien.  If he starts to show some better contact/average skills and cuts down on the whiffs, he could be legit.

- Chad Jennings of LoHud ran through the long list of concerns tied to the Yankees' internal starting pitchers to illustrate how important it is that they sign Tanaka.

- On Wednesday, SJK of NoMaas went to the career number comparisons to show how egregious it was that Mike Mussina only got 20.3% of the HOF vote.  He's not wrong, but I'm not as surprised as other people are that Moose got hosed that badly.

- Mike Axisa of RAB analyzed the new projected starting lineup and the return of patience and count working skills that should come with it.

- On Thursday, Jason Cohen of Pinstripe Alley compared Eduardo Nunez's 2014 projections to 2013 league average production to see how he stacks up as a backup plan at third base.  Spoiler alert, not well.

- Derek Albin of Pinstripe Pundits continued his evaluation of Cash's free agent history with a look at how he's done signing first basemen and DHs.

- On Friday, Domenic Lanza of IIATMS/TYA visually displayed the significant improvement to the Yankee offense for 2014.  Even without Cano, that's a helluva lot better than last season.

- Bryan Van Dusen of The Greedy Pinstripes wondered if CC Sabathia can rebound in 2014 in response to CC's declaration that he's figured things out.

Little Smashing Pumpkins for this week's jam.  Could not believe how many live versions of "X.Y.U." there are on YouTube but not a single decent album version.  Whatever.  We'll do it live, fuck it!!

Enjoy your weekends, everybody.
Posted by Unknown at 3:26 PM No comments:

Sounds like Wells was removed from roster. RT @VernonWells10: Thank you @Yankees for opportunity to be a part of such a storied franchise.
— Andy McCullough (@McCulloughSL) January 10, 2014

Just need somebody to confirm it to really kick off the celebration...

** UPDATE 12:37 PM- Barbarisi is tweeting it as fact and that's good enough for me.  Cue the celebration!

Buried in yesterday's NY Daily News story about A-Rod's plans to fight the arbitration ruling should it end up being not in his favor was this little nugget about him possibly accepting a shorter suspension if that ended up being the decision:

"... sources say the Yankee third baseman would likely accept a suspension of 65 games or less without a fight. The legal fees to combat a 65-game ban would likely cost Rodriguez, who is scheduled to earn $25 million in 2014, more than he would lose in salary."

This is the first we've heard about A-Rod being willing to accept any suspension.  The stance he and his team have taken all along has been that the suspension and manner in which it was carried out was unfair, so it does strike me as a bit strange that they would be willing to accept a suspension after all their grandstanding.  Then again, this whole thing is about money for A-Rod, so if he would be able to save some by not fighting a much shorter suspension that would make sense from a personal financial standpoint.

It's worth nothing that there has been no indication that the decision will be for 65 games or fewer, and there has been no statement from A-Rod or his legal team confirming that they are willing to accept that suspension.  The plan, as far as we know it from their side, is still to take the arbitrator's decision to a judge for an injunction when it is handed down.  Guess we'll find out what the real course of action is when Horowitz issues his decision.
Posted by Unknown at 10:23 AM No comments: 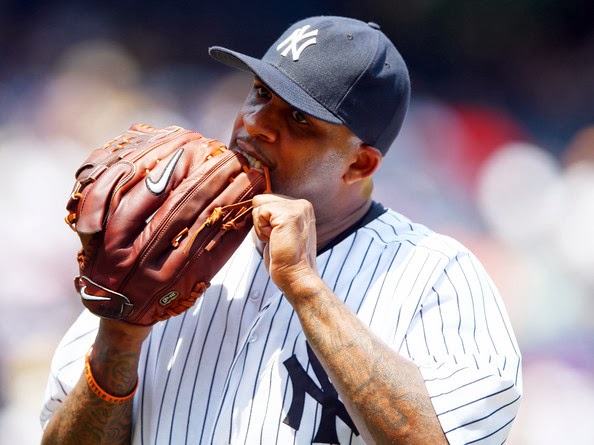 CC Sabathia sat down for an interview with Meredith Marakovits on "Yankees Hot Stove" last night to talk about his 2013 struggles and what he has to do to overcome them.  As part of the interview, CC downplayed the concerns about his lost velocity this past season, saying ""It doesn't mean a lot.  I've figured out I can pitch with it or without it. Whatever that is. Whether it's 90 to 92, or 92 to 94. I can pitch both ways."

That statement should come as good news from the guy the Yankees are hoping will regain his ace form in 2014.  Considering how much he struggled with his 4-seam fastball in 2013, however, the statement rings a bit hollow.  As much as we'd all love to give the big fella the benefit of the doubt, his failure to figure it out over the course of last season makes the statement more of a "let's wait and see" situation.

Sabathia said he's healthy and feels good, and he was supposed to return to his regular offseason throwing program after missing it last offseason.  That's reason for optimism and his offspeed stuff is still plenty good enough to get guys out.  If he can improve his fastball command, it shouldn't be too hard for a pitcher of his caliber to "figure out how to get guys out" in 2014.  Tanaka or no Tanaka, the Yankees need a bounce back from CC this season and his fastball is going to be the key to that.  If he's feeling good about it right now, that's a good start.
Posted by Unknown at 7:23 AM 1 comment: