BREAKING: Jeter Back To The DL

As first reported by Meredith Marakovits and just confirmed by a few other beat writers, Derek Jeter has been placed on the disabled list, presumably to cover the litany of leg issues he's dealing with but officially due to the latest one, a Grade I strain of his right calf.

In addition to adding Alex Rodriguez to the active roster, the Yankees also designated Brent Lillibridge for assignment this afternoon to clear a 40-man spot and recalled David Adams from Triple-A SWB.  For the next few days at least, they'll have A-Rod and Adams to handle third base and Nunez and Nix to handle short.  Trading 2 third baseman for 2 shortstops on the active roster.  No word from the team yet on plans for Jeter moving forward, but at least they aren't sending him back out there to have his legs snap beneath him as he tries to run to first.
Posted by Unknown at 4:59 PM 1 comment:

From the league itself:

"Commissioner Allan H. (Bud) Selig announced today that third baseman Alex Rodriguez of the New York Yankees has been suspended without pay for the remainder of the 2013 Championship Season and Postseason and the entire 2014 Championship Season for violations of the Joint Drug Prevention and Treatment Program and the Basic Agreement.

Rodriguez’s discipline under the Joint Drug Prevention and Treatment Program is based on his use and possession of numerous forms of prohibited performance-enhancing substances, including Testosterone and human Growth Hormone, over the course of multiple years. Rodriguez’s discipline under the Basic Agreement is for attempting to cover-up his violations of the Program by engaging in a course of conduct intended to obstruct and frustrate the Office of the Commissioner’s investigation. The suspension, which will become effective on Thursday, August 8th, will cover 211 Championship Season games and any 2013 Postseason games in which Rodriguez otherwise would have been eligible to play.

Under the terms of the Joint Drug Prevention and Treatment Program, Rodriguez’s suspension will be stayed until the completion of his appeal if Rodriguez files a grievance challenging his discipline."

There you have it.  With the suspension not starting until Thursday it's a few less games than initially reported, but this is basically what was expected to come out of this announcement.  Now let the fun of the appeal process begin...

** UPDATE 2:26 PM- Bud Selig has issued his own personal statement, if you're interested in reading what he has to say. **

** UPDATE 2:47 PM- Yankees have released their official statement as well, and it contains a return of fire across A-Rod's bow in its denial of any involvement in the investigation.  Fun times. **

** UPDATE 3:39 PM- The MLBPA has issued a statement on all the suspensions, pledged their support to A-Rod and his decision to appeal, and said that they believe Bud Selig "has not acted appropriately under the Basic Agreement." **
Posted by Unknown at 2:22 PM No comments:

It was another poor outing for Phil Hughes yesterday, the poorest and shortest he's had since his 0.2-inning meltdown against the Mariners in May.  In his last 3 starts, Hughes has completed just 12.1 innings and has given up 13 R (10 ER) on 19 H in those innings with 8 BB to just 6 K.  His leash with Joe has gotten shorter to the point that were it a literal leash it would probably be choking him to death as soon as he took the mound, and his inability to work efficiently and deeply into games is becoming a burden on the bullpen.  Hughes needed 71 pitches yesterday to retire just 8 batters.

Combined with the unadulterated putridity that has been CC Sabathia's last 4 starts, suddenly the Yankees are rolling with an even worse rotation than they had a few weeks ago.  The group that needed to turn things around in concert with the offense if the Yankees were going to make a serious playoff charge has become an alternating "all or nothing" collection of some of the best and worst pitching we've seen this season.  For every great start Hirok or Nova goes out and pitches, Sabathia and Hughes pitch one equally as bad if not worse a day or 2 later.

Yanks Planning To Run Jeter Into The Ground Now? 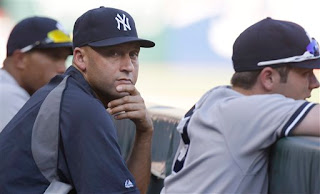 That Derek Jeter is out of the lineup again and possibly heading back to the disabled list for leg issues is not surprising.  He's battled them since first starting his comeback from ankle surgery in Spring Training and 2013 has all but turned into a lost season for him because of it.  Based on comments made by Joe before and after last night's game, the Yankees' possible plan to handle Jeter moving forward does come as a bit of a surprise.

Today Should Be Fun, Huh?

It's a new week, the Yankees are further back in the playoff races than they have been thanks to another series loss, but fear not, people, because we should have a multitude of awesome stories to distract us from that today.

Sometime this morning, MLB should formally announce its suspensions of all the players connected to the Biogenesis clinic.  From the latest media reports, anticipation is that Alex Rodriguez will be handed a suspension through the end of the 2014 season but will not have his right to appeal blocked.  Barring any last minute injuries or changes in Bud's plan, A-Rod and all the great media coverage that comes with him should be back in the lineup tonight.

Later in the day, probably before the start of tonight's game, we could get news on the 3 latest injury setbacks to afflict the team.  Derek Jeter could be put back on the DL with a Grade I calf strain, Michael Pineda could have problems with his surgically-repaired right shoulder, and David Phelps could have a serious elbow problem.  Yaaaayyyy!!!

And if that wasn't enough, the Yankees could lose tonight to a former mid-tier lefty pitching prospect in Jose Quintana, a guy they basically let walk away after the 2011 season.  He's hooked on with the White Sox and has pitched to a 3.62/.378 slash in 22 starts this year, good for a 2.5 fWAR or more than any other non-Kuroda starter on the Yankees has this season.  And who says the Yanks can't develop pitching talent?

Yes sir, this is going to be an awesome day.  Suspensions, injuries, endless beat writer stupidity and A-Rod bashing, and former prospect reunions.  Great day to be a Yankee fan indeed!