I had to wait.  I couldn't jump in with everybody else and celebrate/talk about the A.J. trade to the Pirates on Friday or Saturday as if it were official.  I wanted to, but I couldn't.  Not until I knew the physical was passed and Bud approved the deal.  After all that A.J. put me through, I had to make sure he was dead and gone before I celebrated.  Kind of like he was Michael Myers.

And now that time to celebrate has come, thanks to this tweet from Mr. Yankee, Jon Heyman:

I was out of ice for the champagne, but goddamn, it did its job!  And Korbel has never tasted so delicious.

There's an Incubus song that I've always liked, and I think the lyrics to its chorus ring more true to me when talking about A.J. Burnett being traded away from the Yankees than ever before:

I haven't felt the way I feel today
In so long it's hard for me to specify
I'm beginning to notice
How much this feels like a waking limb
Pins and needles
Nice to know you
Goodbye!

The dead limb on the body that is the Yankee rotation has not only been awoken, but chopped off and fed to the poor.  Goodbye, A.J.  It's been fun (not really).  I'll always remember Game 2 of the '09 World Series; the argument could be made that the Yankees won that World Series thanks to your performance in Game 2.  And I'll also always remember the 15-inning game against the Fraud Sawx when you went toe to toe with Beckett and Game 4 of last year's ALDS, where you gave the Yankees one more night.  But all in all, there's too much of your time in pinstripes that I'd like to forget.  So best of luck to you in Pittsburgh, and as this song for the older generation of Yankee fans, hand picked by my father, says- So long, farewell, auf Wiedersehen, goodnight.

Posted by Unknown at 5:24 PM No comments: 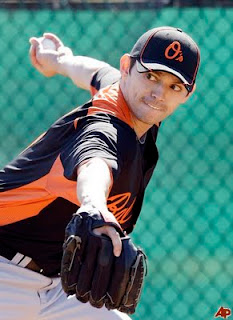 (Photo courtesy of The AP)﻿
Normally, signing a guy like Clay Rapada to a Minor League contract would be enough to just warrant the mention it got on the AB4AR Facebook Page last night.  But with the Yankees' love for left-handed bullpen options and the fact that they lost one on Friday when Hideki Okajima failed his pre-ST physical, Rapada probably deserves a little more ink.

You can argue about the need for another lefty in the bullpen.  I'm on the record as being in the camp of those who believe the Yankees are fine with Boone Logan and their strong stable of righties who pitch left-handed hitting effectively.  But there's no arguing that the Yankees love having more lefty bullpen options than they need, evidenced by their signings of guys like Marte and Feliciano to multi-year deals and their efforts this offseason to bring guys like Okajima and Cesar Cabral to camp.  The loser of the 5th rotation spot will likely become the long man and 6th member of the bullpen, but that 7th spot is up for grabs.  He would lessen their flexibility with his struggles against right-handed hitting, but Rapada has just as good a shot as anybody to grab that spot if he continues to perform against lefties like he has in the past.
Posted by Unknown at 1:30 PM No comments:

Spring Training Is Open For Business

It's not official until late March, but today is a significant signal that winter is over and spring is in the air as pitchers and catchers officially report to camp.

There's been a lot of activity around the Yankees' Tampa complex already this week, but with locker assignments, physicals, media sessions, Joe's season-opening press conference, and maybe some light baseball work, this is the first day of formal activities.

The 2012 Yankee season is officially underway, folks.  Hit it, Frankie!

Posted by Unknown at 9:52 AM No comments: