So you guys know how I live in Wisconsin, right?  And you know how the Yankees are coming out here for a weekend series in May, right?  Well that week just got better.  It was already going to be bonkers with my family and possibly 3 of my friends coming out for the Yankee series.  I was planning on taking that Thursday afternoon and Friday off.  Now we're probably looking at Wednesday, Thursday, and Friday for an extended 5-day weekend because Queens of the Stone Age announced they're playing a show in Milwaukee on Wednesday, May 7th.  Scooped 2 tickets up as soon as they were available on pre-sale yesterday.  You remember what I said in the Jeter post about not being able to get high and drunk all the time and still function anymore?  Yeah, that's going to be put to the test that week.  I told the girlfriend earlier that there was a good-to-very good chance that I tried to get backstage with Josh Homme at the show and I was only half-joking.  I'd lay down in traffic if Homme told me to.  Now onto the links!

- On Monday, Jesse Schindler of Pinstripe Alley discussed the opportunity in front of Slade Heathcott this season and if he'll be able to capitalize on it.

- Kevin Rozell of Zell's Pinstriped Blog talked to former Yankee PR director Marty Appel, who probably got to see and hear a ton of crazy stuff during the early Steinbrenner years.

- On Tuesday, Chris Mitchell of Pinstripe Pundits searched for some previous MiL comps for Greg Bird to put his excellent 2013 season into perspective.  It's stuff like this that makes me glad I held back and kept him out of my top 10.  Want to see a repeat first.

- On Wednesday, Roberto E. Alejandro of Respect Jeter's Gangster wondered what he'd have to do with his site now that the namesake won't be playing baseball anymore.  I know the feeling, bro...

- Vizzini of NoMaas broke down the starting rotation by way of projections and offered up some expectations for the members.

- Jason Evans of Yanks Go Yard weighed some of the potential free agent replacement options for Jeter at short next year.

- Mike Axisa of RAB released his preseason top 30 prospects list, which is always one of my favorite prospect reads.

- Michael Eder of IIATMS/TYA looked ahead to 2015 and how much younger the Yankees will be getting with all the older free agents they'll have coming off the books.

- SG of RLYW reflected on Derek Jeter and the Core Four Era as it enters its final year.

- On Friday, Chad Jennings of LoHud had the details on CC Sabathia's offseason workout program and some words from the big fella himself on how he feels about the upcoming season.

- El duque of It Is High... wrapped up his week-long countdown of the top 15 coolest Yankees of all-time.  Definitely worth going back and checking out the whole list.

Given the information in the beginning of the post, you had to know Queens was coming as today's jam.  And they are.

Enjoy your weekends (and your Valentine's Days), everybody.
Posted by Unknown at 3:30 PM No comments:

How Much Are The Yankees Regretting Giving Brendan Ryan A 3-Year Deal Right Now? 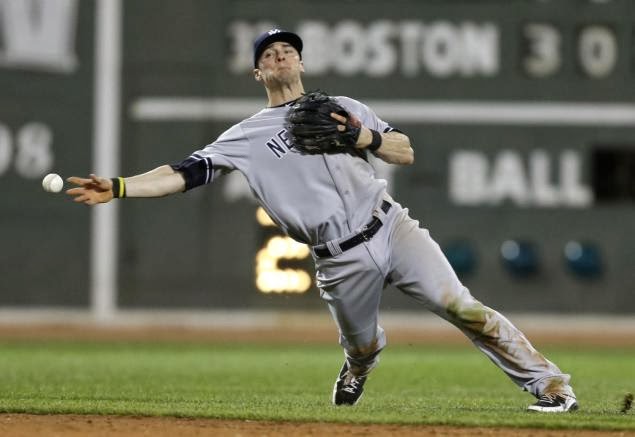 One of the first moves the Yankees made this offseason, before they really started throwing money around, was re-signing Brendan Ryan to be Derek Jeter's defensive caddy at shortstop.  There was mutual interest in a return after Ryan finished last season as the starting shortstop and looked incredibly good doing it, and at the time a deal to shore up the defense at the most important infield position made a lot of sense.  Nobody knew what to expect from Jeter after his injury-plagued 2013 campaign except that he would be back for another year, and the list of productive 40-year-old shortstops isn't a long one.  When Jeter signed a new, more lucrative deal of his own, it looked like he might be planning to stick around beyond 2014 and the Yanks responded by locking up Ryan for 2 years guaranteed plus a mutual option for a 3rd year. 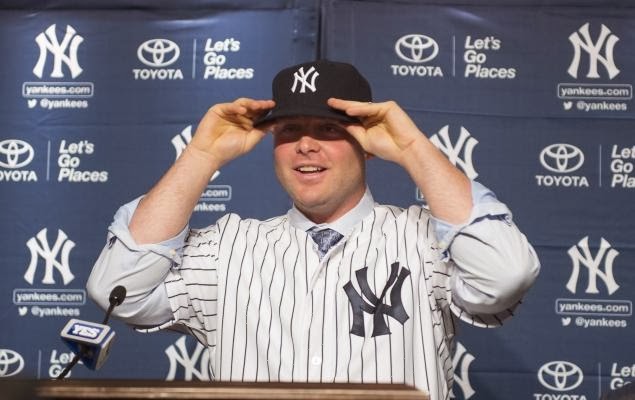 Today's the day.  As you read this, the late arrivals from the pitcher/catcher corps are showing up at the Tampa complex in preparation for tomorrow's first official team workout.  Spring Training has begun and baseball is officially back!  It's a little late to prep with the players already arriving, but I'm giving myself a 1-day grace period since the first workout isn't until tomorrow and covering the catchers today.  Behind the plate is one part of the roster where the Yankees have very good depth.  They've got no less than 4 catchers who could play every day at the Major League level right now if they needed to and their top organizational prospect waiting in the wings.  After the jump, the backstops who'll be appearing in ST this year.

2015 will be the first year in 20 that the Yankees will have a new starting shortstop, and per this report from Jon Morosi they could have Cuban free agent to be Aledmys Diaz in their sights for the job.  Diaz held a workout for teams yesterday in preparation for his free agent eligibility next week and the Yankees were one of several teams in attendance.

I don't know a whole lot about Diaz other than the basics.  He's 23 years, listed at 6'1"/185, and a right-handed hitter.  In his most recent Cuban league season, he hit .315/.404/.500 with 12 HR and 11 stolen bases and I guess that's enough to qualify him as a bat-first prospect.  Defensively he's a question mark, but one scouting report I read gives him plus arm strength.  We already know the Yankees are planning to go nuts on the international free agent market this year.  Perhaps Diaz will be the first of those dominoes to fall.