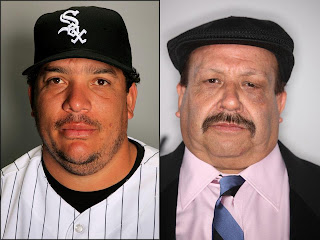 Maybe?  Kinda?  Sorta?  Am I reaching too far there?  I mean, that's a picture of Colon from a few seasons ago and he looks like complete dog mess.  Who knows what he looks like now?
Posted by Unknown at 4:00 PM No comments:

Keith Law realized his yearly "Top 100" prospects today on ESPN.com, which is the baseball nerd equivalent of a new Harry Potter book coming out at midnight.  I'm not an ESPN Insider (because I'm a poor-ish, 20-something who spends too much money at the bar), so I can't link to the full list, but the Yankees managed to put 5 in the top 100 (Jesus at 4, ManBan at 12, Gary Sanchez at 68, Dellin "Beast"ances at 73, and Brackman at 88) and had Austin Romine just miss making it.

In addition to that, Law had his Top 10 list for each organization.  The Yankees was as follows:

Now consider this. The Triple-A rotation in Scranton to start the season is going to be Brackman, Noesi, Warren, David Phelps, and D.J. Mitchell.  That is probably the greatest starting rotation in Triple-A history!  Then you've got ManBan, The Beast, Stoneburner, and Shaeffer Hall making up the bulk of the rotation in Trenton.  That's 9 legitimate pitching prospects in Double-A or higher who, at worst, have 'middle-of-the-rotation' potential.  That's FUCKING INSANE!!!  And then you factor in the gaggle of solid catching prospects, Heathcott, and the crop of high-potential position guys from the 2010 draft and it's almost too much for me to stand.

Hey, look at that!  I'm aroused again.  Good thing I'm sitting at my desk.
Posted by Unknown at 12:31 PM No comments: