ESPNNY Kicks The Stupidity Up A Notch

Seeing as how we're all already subjugated to the never-ending stupidity of Wallace Matthews and Andrew Marchand when it comes to ESPN's Yankee coverage, you would think that the Worldwide Leader would ease up a little and maybe throw us a bone when it came to adding to the ESPNNY "talent" pool.  Maybe somebody who was actually knowledgeable about the sport and could focus on actual meaningful things going on with the team instead of just writing down whatever illogical thoughts might be clanking around in his or her empty head. 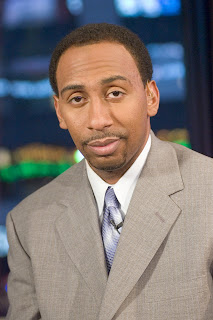 ... has been brought back to potentially add to the nonsensical blabbering that spews forth almost daily from the ESPN Yankee blog.

Now don't get me wrong, I think Screamin' Stephen A. is a knowledgeable dude.  When it comes to basketball.  The guy was the first one to call the whole 'LeBron and Bosh to Miami' story and props to him for that.  But anytime he opens his mouth to make a point or an argument about any other sport, I start giving serious thought to cutting my wrists with the nearest sharp object to end my suffering at his hand.  And the only reason I bother to mention this is because Screamin' Stephen took time to mention how his Yankee talk was going to be different than everybody else's in his re-introductory column:

"Instead of limiting our focus to Yankees greats Derek Jeter, Mariano Rivera, and Alex Rodriguez -- or A-Rod's love life -- just as much attention will be paid to Brian Cashman's productivity."

Oh, you're going to talk about Cash and his decision making.  Good call, Steve.  There really hasn't been enough of that going on lately.  At all.  Good thing you're here now to pick up that slack.