Teix Now Front And Center On The "Needs To Produce" Radar 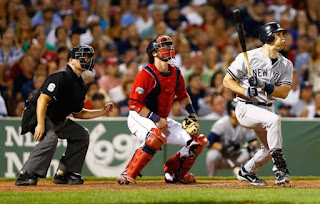 (More swings like this, please.  Courtesy of Getty Images)

2013 was already going to be an important year for Mark Teixeira.  After a stellar Yankee debut season in 2009, the last three have been a downhill trend of offensive regression and 2013 was shaping up to be the tipping point for the rest of Teix's Yankee career.  He could either bounce back and prove that he still had enough in the tank to be a consistent middle-of-the-order threat, or continue his decline, officially enter the downside of his career, and become the latest contract anchor on the payroll.

Teix's comments to Dan Barbarisi a few weeks ago showed that he was very aware that he had reached this stage in his career, and his candor and openness about his regression was refreshing to read in a modern sports world full of excuses and cliches.  But that position became much less acceptable when A-Rod had his surgery and even more unacceptable when Curtis Granderson was shelved over the weekend.  Teix is now more important than ever to the lineup and the Yankees' chances for success this season, a point Mike Axisa touched on earlier in the week.  After spending four years flying under the radar in the Bronx, the spotlight is going to shine brighter on Teix than it ever has, and he needs to step up and meet the challenge.

Don't Get Too Jumpy About Hughes Just Yet 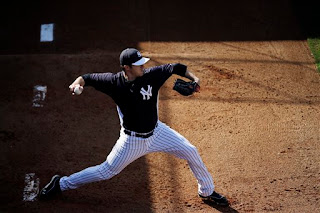 The latest bad injury news came in yesterday when Joe said "it's possible" that Phil Hughes won't be ready for the start of the season due to the bulging disk in his back.  At least it's bad news if you consider that tiny morsel of vague information news.  Hughes has done nothing but work out in a pool since the injury was diagnosed, and there's still no definite timetable for when he'll pick up a ball and throw again, let alone pitch in a ST game.

But Joe also acknowledged that it's still "too early to tell that" when delivering his pseudo-update on Hughes' condition, and with as much time as there still is in ST he's right.  Hughes has another two weeks before time really starts to work against him, and as a guy with a history of back injuries it's better to use as much of that time as he needs and not rush back to risk further injury.  It's possible that Hughes won't be ready for the start of the season just like it's possible that Jeter won't and just like there's "a chance" that A-Rod won't make it back at all this season.  Until we have a better idea of when he's going to start throwing again, it's not worth wringing our hands over.