The Big Fat Straw That Broke The Camel's Back 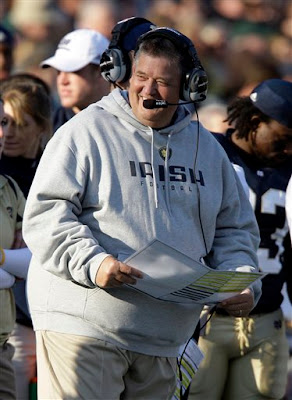 Second straight year losing to an inferior Big East opponent on Senior Day (no offense, UConn, but as a former alum I know that our football program isn't what we're known for).  Consider the writing on the wall.  Jack Swarbrick won't come out and say it but we all know it's over for Fatshit, and after today's game it is certainly warranted.

It's like you said back in '04, Charlie; what you are is a 6-5 football team.  And that just isn't good enough.  Do the smart thing and just step down tomorrow.  A classy move like that will at least give you a chance to keep your XXXXL hoodies and the pallet of Hostess cookies in your office closet, but it won't help the fact that Clausen, Tate, and Floyd are all leaving for greener pastures in the NFL after this season.

Thanks for playing, big guy, and thanks for leaving the program in worse shape than it was before you waddled onto campus.  Now where's that chain?

Posted by Unknown at 5:33 PM No comments: