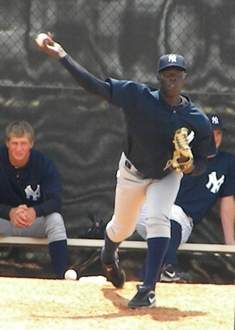 (The next big thing?  Courtesy of Josh Norris)

Well I think I've dragged the suspense out long enough.  No more explanations of my thought process, no more looking back at the guys who aren't on the list anymore, and no more teasing with the guys who didn't make it.  It's time to start getting into the meat and potatoes of the 2012-2013 AB4AR Top 30, and that starts today with spots 30-21.  In a slight change from last year, I'm splitting the actual Top 30 up into 3 10-spot posts and today we'll tackle the bottom 10.

The bottom third of this year's Top 30 is the place where you'll find a lot of new faces, be they players who just started their pro careers in 2012, players who just worked themselves onto the prospect radar, or players who were on the fringe and did enough last year to force themselves onto the list.  It's also a place where you'll find guys who dropped in the rankings from their positions last year, mainly because of their failure to progress and improve upon their 2011 production.  It's a collection of unknown potential and unrealized potential.  So without further adieu, here are the first 10 spots in this year's AB4AR Top 30.
Read more »
Posted by Unknown at 11:00 AM No comments: 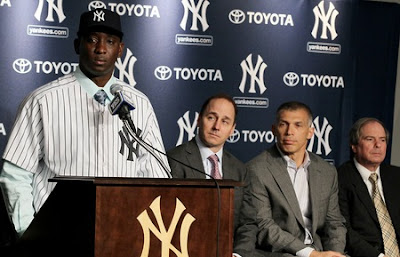 (I wonder if he smiles at the Nats' presser.  Courtesy of Getty Images)

Just as things were starting to look bleak for old Sour Puss, Scott Boras worked his magic again and got another team who felt they needed bullpen help to overpay for his client.  According to Jeff Passan of Yahoo! Sports, the Washington Nationals have agreed to sign Rafael Soriano to a 2-year/$28 million deal with an option for a third year.  In almost identical fashion to how he hooked the Yankees after his brilliant 2010 closing campaign in Tampa, Soriano parlayed an excellent year into another big contract.  You gotta give credit where credit's due; he and Boras knew what they were doing after all.

The best Yankee-centric news to come out of this development, besides ending all the discussion about what we'd be willing to pay to take Soriano back, is the guarantee of a second supplemental 1st-round pick in this year's MLB draft.  Paired with the pick the Yankees would have already had and the supplemental pick they get for Cleveland signing Nick Swisher, the Yankees are now holding 3 of the first 32 picks in the draft.  Right now those picks would be the 27th, 30th, and 32nd, with the possibility of them shifting depending on where Kyle Lohse and Michael Bourn end up signing.

From a prospect perspective, since that's what this week is all about, this is a big opportunity for the Yankees to add some depth and high-ceiling talent to their farm system.  They haven't had much success with their most recent 1st-rounders, reaching for Cito Culver and Dante Bichette, Jr. only to watch both of them stagnate in Low-A ball in 2012, and it's still too early to make a solid call on Ty Hensley, who raised some eyebrows post-draft with the reports of his "shoulder abnormality."  That, combined with the injury and regression struggles of the organization's upper-level starting pitching, has created another talent void in the system, a void that can start to be filled by scoring in this year's draft.

The Yankees played the qualifying offer game correctly and have been rewarded for it with more picks and a bigger draft spending pool.  I know they're drafted heavily on makeup and intangibles the last few years, but this year might be the year to put that aside a bit and go for the big talent.  They don't all need to be home runs, but the Yankees have to hit big with at least 1 of this year's picks.