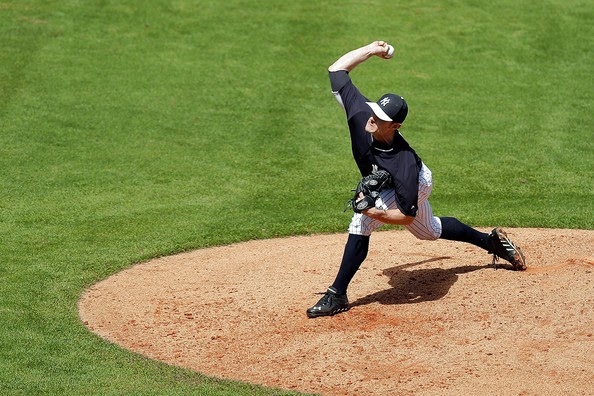 There are 5 days left until Opening Day, fewer ST games than that.  There's not much left to guess about at this point, so it's as good a time as any to make my official Opening Day 25-man roster prediction.  Without further ado, here's what I'm expecting to see:

In what was Derek Jeter's final ST road game ever, the Yankees lost to the Blue Jays 10-6 thanks to some truly horrid bullpen work by Preston Claiborne.  Gave up 6 runs, recorded 0 outs.  He probably cost himself a chance at a roster spot with that.

- Jacoby Ellsbury played in another MiL game and went 5 innings in center field to go along with a 1-4, 1 BB day at the dish.  He's scheduled for another one today and the team is saying he'll be ready for Opening Day.

- After John Ryan Murphy got reassigned on Tuesday, it was Austin Romine's turn yesterday.  By default, that makes Francisco Cervelli the (well-earned) Major League backup.

- Confirmed that Brendan Ryan will open the season on the DL.  Reported that Alfonso Soriano has been dealing with some shoulder tightness; nothing that serious.

- David Phelps and Adam Warren are scheduled to pitch out of the 'pen in today's game.  Ivan Nova and Michael Pineda threw bullpens yesterday.
Posted by Unknown at 7:15 AM No comments: