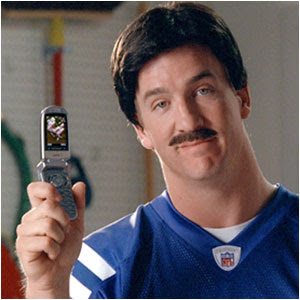 Sexy Rexy and the Fighting Sanchezes look to continue their improbable run to the Super Bowl and what better team to beat to get there/have their run stopped by than the Colts, the team who laid down for them in Week 16 to get the ball rolling on their season-ending run that carried over in the first 2 rounds of the playoffs.

So far, Mark Sanchez has done everything the Jets have asked him to do. Make smart decisions, complete a pass here and there, and take care of the ball. He was one Braylon Edwards drop away from having a killer Wild Card game against Cincy, and was just as efficient last week against what was thought to be a good defense in San Diego. Now, just like the last 2 games were, this Sunday will be Sanchez's biggest test to date.

After bottling up a Ravens' run game that stomped all over the Pats, Indy will be looking for similar results against Thomas Jones and Shonn Greene. If they can keep the Jets from running wild and controlling the clock, they can force Sanchez to have to beat them and hopefully force turnovers with their 2-man pass rushing bonanza of Dwight Freeney and Robert Mathis and their severely underrated secondary.

On offense, Peyton Manning will look to do what he does best, and that is pass against the blitz. The Jets' biggest asset on D is the blitz, as they have already used it to make Carson Palmer and Phillip Rivers look like Pee Wee QBs, but Manning is the league's best QB against the blitz. Plus, Manning could care less about Reggie Wayne getting lost on Revis Island as he has already shown he is perfectly happy checking down to Austin Collie, Pierre Garcon, and Dallas Clark, and letting them run wild. If the Jets are looking to put pressure on Manning, they better damn well have their coverage straight. If they don't, it could be a long day.

The best subplot to this game is the fact that each team has a high level of motivation to win. The Jets need to win to prove that their Week 16 matchup was no fluke and that they CAN beat the Colts best players over 4 quarters. The Colts need to win to prove that they are that much better than the Jets and to keep the sting of the undefeated season that could have been fresh in their minds as they head for a title. So far this postseason, The Dirty One has outplayed 2 QBs who were considered better than him. That streak will end this Sunday. Jets will cover, but Colts will win.

After both looking like shit at season's end and opening their teams up to all kinds of upset talk before last weekend against hotter teams, the Saints and Vikings both snapped out of it last week and reminded everybody why they were the #1 and #2 teams in the NFC. Now with potential Super Bowl storylines aplenty on both sides, they will play to end the debate about who the best team in the NFC was this season.

I'm not even going to try to badmouth Favre anymore; the guy has been lights out this year, period. He defied the odds and his most recent history and made all the haters like me sit down and eat a big helping of shut the hell up. Last week he looked like Favre circa 1999 in his almost single-handed destruction of the Cowboys defense. A similar performance is going to be needed to beat the Saints, who beat the mighty Cardinals offense down and probably retired Kurt Warner, and is very possible against a defense that thrives on taking chances. Jabari Greer vs. Sidney Rice is the matchup to watch when the Vikes have the ball, narrowly edging out the mental chess game that will be Favre vs. former teammate Darren Sharper.

The biggest key to this game is going to be the Vikings pass rush. Last week they made Tony Romo miserable, sacking him 6 times and forcing 3 turnovers. But that performance came with a price as both Ray Edwards and Kevin Williams left that game with injuries and were held out of practice on Wednesday and Thursday. The Vikings have been able to cover for their weak LB core and average secondary by generating such a great pass rush with their front 4, but if Edwards and Williams either can't go or aren't effective, they will be forced to blitz to get pressure on Drew Brees. And just like Manning, Brees eats pieces of shit like a blitz for breakfast; he diagnoses them before the D even knows it's blitzing and almost always finds the open man, usually for huge gains. If the Vikings are forced to go to the blitz because of their injuries up front, it will be a long 4 quarters for their secondary and a lot of funny shots of Brad Childress looking forlorn on the sidelines.

I see this game being close for the better part of the first 3 quarters, and then a defensive or special teams TD giving the Saints the breathing room they will need to hold on and get to their first Super Bowl. Brees and Favre will both play great, but Brees will make a few more key throws and solidify himself as the best QB in football not named Peyton Manning.

Playoff Predictions (Season): 2-6
Posted by Unknown at 1:59 PM No comments: