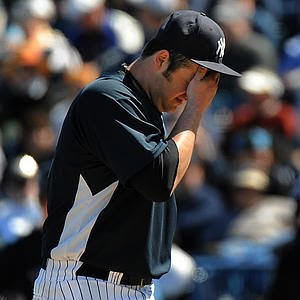 So the great 5-Spot Race kicked off yesterday, and in keeping with the race comparison it was the equivalent to one horse stumbling out of the gate and getting shuffled to the back of the pack going into the first turn and the other completely wiping out, throwing its rider, and having to be put down after the race by on-track doctors.

First Phil Hughes.  He started the game and pitched 2 innings.  In those 2 innings he allowed only one hit and walked a batter, but that hit was a home run off the bat of the immortal Sean Rodriguez on a horribly-placed 3-2 fastball.  Hughes' fastball command was his biggest issue, mainly because it didn't exist.  In his 2 innings he threw 33 pitches, 18 of them for strikes, hardly economical and a direct result of his inability to locate his fastball, which topped out in the low 90s.  On the positive side, Hughes threw about 8 or 9 changeups, the pitch he has been working on early this spring, and threw those relatively well.  All in all, not a great outing by any means for Hughes, but considering how off his fastball command was it certainly could have been much worse.

Now on to Joba.  In a word, he was brutal yesterday.  1 1/3 innings, 3 hits allowed (all extra-base hits), 3 walks, and 5 earned runs.  He also threw 33 pitches and only 14 for strikes.  His velocity was also in the low 90s and he didn't seem to have any bite or sharpness to any of his pitches.  But Joba does get a pass from me for this bad outing because he has been sick with flu-like symptoms all week, reportedly losing 7 1/2 pounds due to his sickness, and hadn't thrown since Tuesday.  I know when I get a bad head cold I can barely move and I sit at a fucking desk all day, so I'm not going to rag on Joba for not being at his best at a job that requires much more physical strength and mental sharpness than mine does when he's spent most of the week with his head either on the couch or in the toilet.

However, this is a competition and Joba's numbers certainly don't bode well for him early.  Hughes did pitch better than Joba yesterday, which has to give him the early advantage.  I'm sure once Joba gets his body back to homeostasis and gets back to his regular work routine he will be much better his next outing.  But for the first test of the spring, yesterday has to be considered a 10-9 round for Hughes.
Posted by Unknown at 11:39 AM No comments: