The official AB4AR Facebook page.  There it is.  Go check it out.  Live it.  Love it.  "Like" it.  We added a few more new fans last week and we're looking for more.  I need to build the AB4ARmy, people, and I can't do it without you.

It's got everything: Links, posts, commentary, analysis, Photoshops, black leather gloves.  It's a Yankee fan's dream.  And you, dear readers, need to do yourselves a favor and "Like" it so you're up to date on the latest and greatest coming from AB4AR at all times.

Here it is again.  It's awesome.  Trust me.  Russell Martin is a fan on Facebook and that's why he's having such a good year so far.*

Is There Anything Up With CC?

(The man.  The myth.  The parachute pants.  Courtesy of The AP)
I touched on it briefly this morning, but the more I reflected on CC's last 2 outings the more I started to think that something was amiss in his game that was causing these un-CC-like results.  I thought surely there had to be some glaring difference in his stats this year that would point to the problem, so I consulted his Fangraphs page and came to a surprising conclusion.

So then what the hell is the problem that is leading to more runners on base and more runs scored over the last couple games?  The answer can be found in the contact that is being made by hitters on the swings they are taking.  While they are swinging more and missing more, when they do make contact against him, the numbers being generated are not in line with what we're used to seeing from CC.  His Line Drive % is way up this year (31.1% compared to just 15.1% last year), and his Ground Ball Rate is significantly down (39.2% this year compared to 50.7% last year).  And to top it all off, CC's current BABIP is .324, over 40 points higher than last year and well above his career average.

Basically, what it comes down to is some bad luck on the part of CC.  Yes, he hasn't been able to put hitters away, but he is still getting the kind of peripheral results you want to see from a top-flight starting pitcher.  The problem has been guys managing to make better contact than usual against him and getting hits to show for it.  When the BABIP and LDR numbers regress back to CC's mean, we should see stat lines that we're used to seeing from him.  Seeing that most of his numbers are positive, it could also be fair to say that he's been getting some crummy calls by the umps that are contributing to his recent increase in walks.

In short, there's nothing to worry about with Carsten.  A few bad calls here and some lucky contact there is all.  Moving forward, we can expect some of those numbers to balance out with what we're used to seeing from CC and the number of baserunners and runs allowed will decrease as well.  Now if only the poor guy could get the bullpen to hold a lead for him.
Posted by Unknown at 3:49 PM No comments: 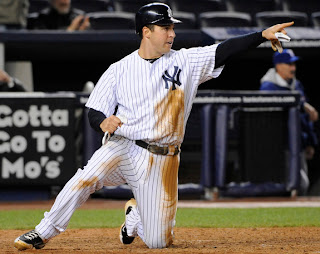 ** P.S.- Somebody find me a video of Bobby Valentine calling Jorge "Whore-Gay Posada" at the end of the BBTN pregame show last night. **
Posted by Unknown at 8:23 AM No comments: