BREAKING: Sabathia Has Fluid On His Knee, Going For An MRI (UPDATED)

Girardi just said on WFAN that Sabathia woke up today with fluid in knee and prob headed for MRI. Unsure what's next for him. #yankees
— David Lennon (@DPLennon) July 3, 2014

That's the whole story as far as we know right now and it isn't good.  After pitching on short rest and throwing 55 pitches in his second MiL rehab start last night, CC Sabathia woke up this morning with fluid in his surgically-repaired and recently stem cell/cortisone-injected degenerative right knee.  He's going for an MRI to assess the level of damage and severity and as of right now his comeback plans are on hold.

More on this story as it comes out...

** 4:49 PM- Via multiple beat guys and gals, Girardi said there was "swelling" in CC's right knee as well.  This doesn't sound at all like it's going to have a happy ending. ** 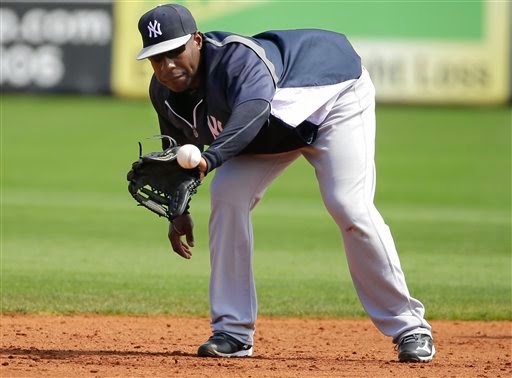 We've been hearing for months about how the Yankees were going to "spend like crazy" and "make a big splash" in international free agency this year.  We heard 3 weeks ago that they already had multi-million dollar deals in place with 3 of the top players available.  The international free agency period officially opened yesterday and the Yankees definitely walked the walk after talking the talk.  Here's the breakdown of all the major signings they made:

That's 9 of Baseball America's top 28 rated prospects, 4 of the top 10 (both Garcias, Gomez, De Leon), and with all the other smaller dollar signings about $14.5 million in bonuses given out by the Yankees. Add in the $12.3 mil in penalties for going well over their slotted amount and we're looking at $26.8 mil total spent in the first day, and that's not including Christopher Torres and his expected $2.5 mil bonus.  Quite the splash indeed.  Hopefully it pays off in a few years.

Sabathia Watch: Getting Roughed Up In His Second Rehab Start

Originally scheduled for today, CC Sabathia had his second MiL rehab start moved up to last night.  Pitching for Double-A Trenton, he went 3.2 innings, throwing 55 pitches and allowing 5 runs (3 earned) on 5 hits and 1 walk while striking out 2.  Like in his first start, his fastball was sitting high 80s-90 and touching the low 90s on occasion.

I haven't seen any reports on the outing or quotes from Sabathia on how he felt, but if something had gone wrong with his knee I'm sure that would have made its way out.  I did find it somewhat surprising that the Yankees elected to move this start up and pitch CC on 3 days' rest.  For as slowly as they took the rest and early workout portions of his rehab, pitching him on short rest in his second game back seems unnecessarily aggressive.  Whatever, I'm sure they had their reasons.  With July 27th set as his activation date and Joe saying he will work on regular rest from here on out, there's time for him to make 4 more starts.  We'll see if the Yankees use all of them.