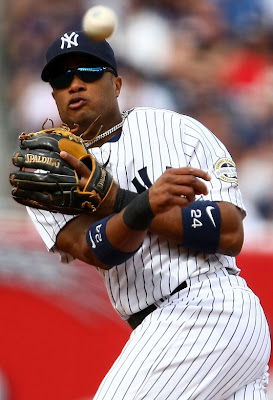 By now, I'm sure you know that Josh Hamilton won the AL MVP today and Robbie Cano finished a distant 3rd.  And if you didn't know that, then shame on you because it makes you a bad sports fan and, more importantly, a bad Yankee fan.  Now Hamilton winning I'm OK with.  The guy had a monster year for what turned out to be the best team in the AL and even though he missed a month he still managed to lead the league in many key categories, including WAR.

But Cano finishing 3rd behind Miguel Cabrera is an absolute joke.  Without standing up on my soap box for too long, here's the argument.  Cabrera put up big numbers from a traditional power position while playing marginal defense at best for a team that was out of the playoff race in mid-summer.  Cano put up big numbers (although admittedly not as big as Cabrera's) from a position not typically associated with big offensive output while at the same time playing Gold Glove-caliber defense (his GG Award supports that) for a playoff team and ALCS competitor in a year where almost all the other names in his lineup around him suffered down years.

Cano firmly established himself as the best second baseman in baseball and one of the best all-around players and he did it for a better, more successful team.  And he didn't even get one first place vote.  Jose Bautista got one first place vote for Christ's sake and all he did was hit a bunch of phony 'roid-aided HRs for another shitty team.  Cano undoubtedly suffered the fate of having all those other big names next to him on the lineup card every day, which voters saw as evidence against his importance to his team, which is a fucking joke.  Robinson Cano was one of the 5 best players in baseball this year and he deserved to finish behind Hamilton in the voting, with Jose Bautista's first place vote and at least 3 of Cabrera's 5.

Money, It's A Gas

It's all about contracts today, people.  Jeter's contract, Lee's contract, and yes, even Mo's contract.  The wheels are starting to turn a little faster this week and while I still don't expect anybody to be locked up before the winter meetings, everything is moving forward to the eventualities that are Jeter, Lee, and Mo being in pinstripes in 2011.  A quick update on all 3 situations.

- Jeter: Yanks came in with a 3-year/$45 mil offer over the weekend that Jeter's agent called "baffling" given Jeter's legacy and off-the-field value.  He and his client are probably looking for something in the 5-year/$100 mil range, which is completely ludicrous.  The Yanks will probably be willing to go to $20 mil a year if they can keep the years down, which I think they do by making the 4th year optional and putting in performance-related clauses.

- Lee:  Earlier it was reported that the Yanks were expected to offer Lee something in the 5-year/$115-120 million range, and now today there is a story out there that the offer is going to be closer to 6 years/$140 million, which would be a bigger deal than CC got.  Lee and his agent are said to be holding out for a 7th year, but nobody is going to come close to matching 6 for 140 so the Yankees are leading coming around the 2nd corner and pulling away from the competition there.

- Mo: The first words out are that Mo is looking for $18 million beans a year and wants a 2-year deal.  The Yanks are said to only want to offer one year.  If this were Jeter, I would understand their hesitation, but we're talking about the best closer of all time who just came off another season where he was the best closer in baseball.  2 years for Mo isn't that big of a risk considering how he's aged.  I would give him whatever he wanted from a money and years standpoint, but that's just me.

Another interesting contract note; the Tigers signed former Red Sox catcher Victah Mahhtinez to a 4-year/$50 million deal.  A bit surprising that Boston would let him go given the "huge" impact he supposedly had on their clubhouse after his arrival, but I guess when you've got Jerrod Saltalamacchia (don't give a fuck if I spelled that wrong.  He's a Red Sock) as your backup, you feel confident in letting the most productive offensive catcher this side of Joe Mauer walk.  Another brilliant move by Theo.  Now tha Sawx ahh goin' to have to count on they-ah hahht and soul, the immoawtal Dahstin Pedroiah even mo-ah!!

** Quick note for the rest of the week- The computer at my folks' house back in CT is ridiculously slow.  I'm talking "sit and watch your fingernails grow as pages load"- slow so there won't be any links to stories where I'm pulling my info from for the rest of the week.  Go ahead and criticize me for not bring my laptop home, but there was no way I was yanking that thing out at the airport to slow me down even more getting through security when I already had motherfuckers' hands all up in my shit with these pat downs. **
Posted by Unknown at 12:52 PM No comments: