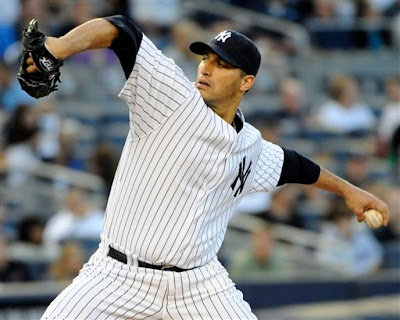 So congratulations, Andy.  Well done.
Posted by Unknown at 8:47 PM No comments:

I'm still pretending that last night's game never happened.  To help everybody else do the same, here's a few choice nugs to check out this morning:

- Matt at TYU has a nice little writeup on Swish's splits as a 2- or 6-hitter in the lineup and what the numbers show us.  The analysis tells us what we already knew, Swish has been the tits this year, but it's always nice to see the numbers supporting it.  With the way guys like Teix, Jorge, and Cervelli are not hitting lately, and with A-Rod's groin still acting up it's good to know the Yanks can plug Swish in anywhere and have him produce.

- Speaking of The Horse's groin, Chad at LoHud has a postgame report detailing everything you could possibly want to know about the injury from last night.  I don't know if reading that much about another man's groin makes me gay or not, but I do know that this being the 2nd or 3rd time this season that A-Rod has tweaked means it's officially a serious issue.

- Last but not least, Ben at RAB says what all of us other real fans think and calls out people for doing The Wave at Yankee Stadium this year.  I can't even come up with anything snappy to say about this.  Ben pretty much covers it.  Fuck The Wave.

Hopefully that helps get everybody through their Friday.  Weekend's coming, bitches!  Get excited.

** UPDATE 8:41PM- The piece on The Wave was actually written by Larry Koestler, Ben was just the delivery boy of said piece.  That's what happens when I'm rushing to get posts put up at the office, but sincerest apologies to Larry.  I'm always one for posts ragging on the stupider side of sports and you, sir, hit the nail right on the head.**
Posted by Unknown at 9:00 AM 2 comments: