2013 Season Review: "What We Thought We Knew & What We Learned" Primer

Week 1 of the 2013 AB4AR Season Review series is in the books and week 2 starts tomorrow afternoon.  Transitioning from the major season storylines, next week will be a look back at the things we thought we knew about the 2013 Yankees before the season started and what we ended up learning after the 162 games were up.  In preparation for that week-long series, here's a recap of March's "What We Know & What We Don't Know" preview posts. 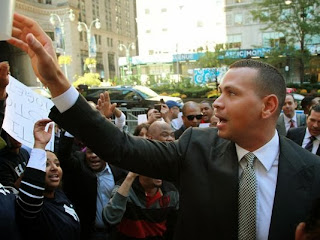 (A man of the people.  Courtesy of the AP)

Time to get some more candlelight vigil participants ready because Alex Rodriguez is going to be spending even more time in court rooms in the very near future.

After the first week of his appeal case against MLB and their 211-game suspension didn't lead to a ruling, that hearing was put on hold due to the arbitrator's schedule.  The hearing is set to resume this coming Wednesday, October 16th, and once again the Yankees will be hoping for a quick resolution so they can start to put their offseason plans together.  But that's not all, Ken Davidoff of The Post reported that the case for A-Rod's "witch hunt" lawsuit against MLB is set to begin in the U.S. District Court in New York on October 24th.  While technically not related to the appeal hearing, A-Rod's legal team does appear to be trying to use that lawsuit and alleged shady practices by MLB to influence the arbitrator's decision on his suspension.

Whatever happens, expect a lot more photo ops and a lot more mud slinging from Alex and MLB.  Hopefully something gets resolved in these next few weeks so the Yankees aren't twisting in the wind when free agency starts.
Posted by Unknown at 8:23 AM No comments: