2012 ALDS Game 5 Preview: The End Or The Beginning

And this is exactly what I hoped wouldn't happen so that I wouldn't have to write this as my Game 5 preview.  The personal commitments I alluded to yesterday are a wedding that I'm in this Saturday.  And while that's a beautiful thing and an honor to be a part of and all of that stuff, it still royally screws up my plans to watch and write about the most important thing in the world every October, Yankee playoff baseball.  Rehearsal and rehearsal dinner is tonight, and the wedding itself is its typical all day/all night affair on Saturday, so at best I'm going to get to watch the first half of tonight's game, miss the end, and if the Yankees do advance I'll also miss Game 1 of the ALCS.

As for that whole "advancing" thing, what do you really say about this team?  If you would have said before Game 1 that the Yankee starters would combine to allow just 8 ER in 30.2 combined IP, that should have worked out to a slam dunk 3-1 series victory.  And if anybody in the lineup not named Derek Jeter or Mark Teixeira would have shown up in this series that's exactly what would have happened.  But the station-to-station problems and RISP Fail that plagued the offense all season has been kind enough to stick around for the playoffs, and now it all comes down to tonight.

Sorry for the short intro this week. Everything I could possibly say here has already been said in my other series-related posts this week. The Yankees need to win tonight and they damn well better or I’m going to be really pissed about not at least being able to see the final game of the season.

- On Monday, Jimmy Kraft of Yanks Go Yard looked back at past performances to show how CC has been very ace-like in his Yankee postseason career.

- Brien Jackson of IIATMS, after A-Rod's slow start to the ALDS, asked how long a leash A-Rod should have been given before Joe moved him in the batting order.  We got our answer on Wednesday and Thursday nights.

- On Tuesday, Domenic Lanza of TYA compiled and presented the staff MLB and Yankee award selections for the 2012 season.  I went off the board with Teix as my biggest disappointment.

- Another one from the Pinstriped Bible team on Wednesday, when Bill Parker compared Robinson Cano's career performance against some great second baseman to try to project Cano's future and value of his next contract.

- Greg Corcoran of Bronx Baseball Daily made a point to remind everybody that this year's playoff format is absolute dogmess.  Because somebody has to keep saying it.

- On Thursday, Mike Axisa of RAB put a nice little bow on the A-Rod pinch hitting story by discussing it as the beginning of A-Rod's end, echoing the sentiments I had after the game.

- Brian D. of Yankees Fans Unite dished a harsh dose of perspective and reality to people who were ragging on A-Rod for his performance.  It is important to remember that most 37-year-olds aren't 30/30 guys anymore.

- William Juliano of The Captain's Blog analyzed Joe's decision to pinch hit Ibanez for A-Rod in Game 3 and similar decisions he's had to make managing an older team.

- SJK of NoMaas took a more positive look at the events that unfolded in Game 3 and punctuated Raul Ibanez's introduction into Yankee immortality with another great Photoshop.

- Alex Belth of Bronx Banter posted his frustrated take on Game 4 last last night.  It's worth reading based on the title of the post alone.

No Friday Jam today.  Song will be covered in the Game 5 preview.

Enjoy your weekends, everybody.  Hopefully it includes a couple of ALCS games. 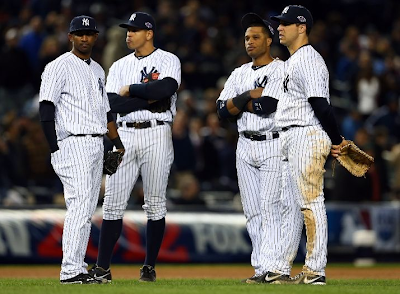 The emotional high that everybody was surely riding from Wednesday night through yesterday afternoon was immediately grounded with the news coming out that Joe Girardi's father had passed away.  Things become even more somber when it was reported that Joe's dad actually died on Saturday, and that Joe had kept it quiet until an obituary was posted in a local paper earlier today.  Knowing that Joe has gone through the emotional ups and downs with his team through the first 3 games of this series while dealing with his father's passing makes the job he has done even more impressive, and puts an "emotional" decision like whether or not to pinch hit for Alex Rodriguez in the proper context.

Another thing that this sad news did was give the Yankees another reason to go out and get a win last night.  It wasn't as if they were already lacking motivation with a trip back to the ALCS on the line, but to be able to do it for their manager, as a tribute to him and his dad, is the type of stuff Hollywood writers used to come up with before they all ran out of ideas.  If there was a "let's win this one for Joe" speech given in the locker room, odds are it came from the mouth of Derek Jeter, who despite being limited to DH duties because of his bruised foot wasn't missing this game for his life.

Emotions were high, there was a lot at stake, and the Yankees held the advantage going into the game again.  Everything should have added up to a win and a series victory.  Instead, last night ended up being one of those textbook deflating losses where everybody swinging a bat just didn't show up.