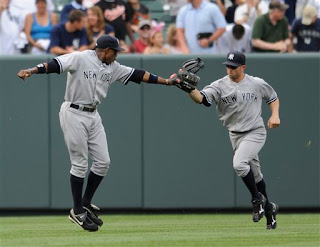 (Well it took a while, but at least we can celebrate.  Courtesy of The AP)﻿
Well today was an adventure, wasn't it?  The game starts off with single, home run, walk, walk for the first 4 Yankee batters, and it looked like another woodshed beating of Orioles starter Jake Arrieta was in the cards.  But Arrieta got it together and managed to throw 6 innings of 1-run ball from there to keep his team in the game, striking out 9 Yankees in the process.

Arrieta was countered by Freddy Garcia, who turned in a" Godfather: Part II"-version of his first start of the season, again going 6 shutout innings, again allowing just 2 hits, but this time also having 7 Ks.  He had good life on his fastball, consistently reaching the upper-80s, and he changed speeds brilliantly between that, his slider, and his curveball, generating 15 swinging strikes and keeping the Oriole lineup off balance all day.  When he has all 3 pitches working, he can be tough to get good swings against, and he had all 3 working and then some today.

Unfortunately for Freddy, he must have been pitching too well for Joe's liking, as Girardi inexplicably pulled him after 6 innings, with a pitch count only at 90, and after he had just struck out 2 batters the previous inning.  Garcia showed no signs of tiring, no signs of losing his command, but Joe's position as a slave to his bullpen binder and a slave to his predefined bullpen roles forced him to make the first of multiple bad bullpen decisions that cost Garcia a win and the Yankees the lead (Trust me, this will covered in much greater detail tomorrow).

After Joba gave up a 2-run homer and Mo coughed up the lead for the 2nd straight outing in the 9th, the Yanks traded 0s with the O's into the 11th, where, after a rain delay, they managed to strike for 3 runs thanks to some timely hitting and bad fielding from Baltimore.  It wasn't pretty, and it certainly didn't end up finishing the way it looked like it would at the beginning of the day, but the Yanks get another W, they sweep the series, and they now sit 12-6 heading into their series with the White Sox tomorrow.

- Jorge looked awful again: 0-4 with 2 Ks.  With as bad as he has been at the plate, you have to wonder at what point the Jesus-O-Meter will start percolating again.

- No Soriano in the 8th today?  What was up with that?  At least Joe didn't go COMPLETELY by the book with that call, but I'd still like to hear an explanation.

- 4-6 for The Captain today, including a 2B.  Sure, not all of them were well struck, but at least they found holes.

- Brett Gardner is flat out lost at the plate.  0-5 today with 4 Ks for his first golden sombrero of the year.  I know he had a couple XBH yesterday, but it's time for Joe to start thinking about getting Andruw Jones some more at-bats.
Posted by Unknown at 5:30 PM No comments:

How Close Is Kevin Millwood To Joining The Yankee Rotation?

Of all the WTF-eliciting pitching signings this season, the most bizarre has to be the recent signing of Kevin Millwood,a guy the Yankees looked at multiple times and decided they didn't see anything they liked and a guy who the rest of MLB said the same thing about when he didn't end up getting one offer to join a team before the season started.

After they did sign him, Millwood justified everybody's lack of interest early by looking downright awful in his first couple of MiL outings.  His fastball was sitting low-to-mid-80s, his secondary stuff was nonexistent, and he seemed like he'd be out of a Yankee uniform before he even had a chance to wear on.  Then he had a solid start in Double-A, earned a call up to Triple-A for another start last night, and wouldn't you know it, the old bag of crap actually pitched alright.

"The 36-year-old right-hander allowed two runs across seven innings of work, striking out three and getting nine ground balls against just one walk and three air outs. Sixty of his 95 pitches were strikes (63.2%). Donnie Collins spoke to a scout who clocked Millwood at 85-86 mph mostly, though he did touch 89 on occasion." (via RAB).

Not a bad outing, but still some causes for concern.  The velocity still isn't there, it's even lower than Phil Hughes' has been, which could get Millwood into trouble if his secondary stuff isn't there and his fastball location is a little bit off.  The fact that he put the leadoff runner on in every inning also doesn't bode well for his future in the Majors, if he has one.  You make mistakes like that in Triple-A with diminished stuff, you give up a couple runs; you make mistakes like that against the Fraud Sawx or the White Sox, you get lit up.

Millwood has time for one more outing before his opt-out clause kicks in, and although he hasn't lit the world on fire in his auditions, the fact that the Yankees keep throwing him out there against better competition and the fact that he hasn't completely blown up leads me to believe he's going to get a shot with the Yankees after his next Triple-A start.  The Yankees have been pushing Ivan Nova back in the rotation due to all the rain delays, so he appears to be falling out of favor with Joe early.  Unless he comes back strong in his next start and looks more like he did in his first outing of the season, Millwood will probably be taking his spot next time around.  Is it the right move?  Hard to say without having seen Millwood against big league hitters yet.  But it does show just how desperate the Yankees already are for starting pitching.

(P.S.- Did anybody have Garcia, Colon, AND Millwood in the same Yankee rotation at any time this season in their office pool?  I know I sure as hell didn't.)
Posted by Unknown at 9:51 AM No comments: