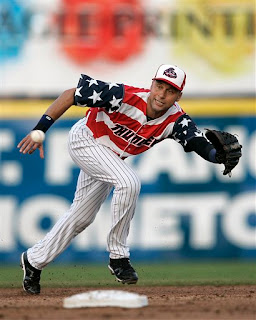 (Awwww, how festive.  Courtesy of The AP)
And I do too.  I hope everyone has enjoyed a safe and fun Independence Day.  And what better way to cap it off than to have The Captain return to the lineup tonight and resume his quest for 3,000 hits?  Well I suppose we could start fixing the economy and creating more jobs, but the Jeter 3,000 hits thing is a close second.

In all seriousness, despite him being a shell of his former self at this point and in no way deserving of being the leadoff hitter over Gardner, it IS good to have Jeter back in the lineup.  It just looks right with his name in the box score, and at least we know he won't botch any of the plays he does make.  Those plays have been a little too brutal to watch with Nunez and Pena at short these last couple weeks.