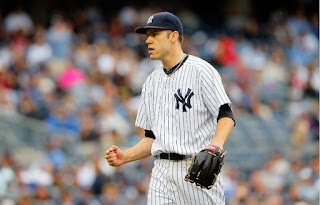 Stacey Gotsulias is the queen of the historical posts over at IIATMS/TYA.  She's always good about remembering what big Yankee moments happened on what days, far better than I am, and it's always a pleasure to see those posts and be reminded of moments I experienced (like David Wells' perfect game).

Somehow I don't think she's going to get to this one, since it probably only matters to manchildren like myself, so I'll do the honors.  With the Yanks heading to Baltimore for a 3-game series tonight, and the video still being up on YouTube, let's take a minute to look back and remember the classic fight from 15 years ago between the Yankees and O's.  It's arguably one of the greatest fights in baseball history and another moment from my early Yankee fandom career I remember watching live.

With Derek Jeter around, the #2 spot in the lineup was never a problem.  Just pencil him in there and fill in behind him or pencil him into the leadoff spot and just plunk somebody in behind him.  The loss of Jeter, paired with the injury or free agent losses of a few other guys, has left the #2 spot in order an absolute dead zone this year.  Of all the issues the platoon-heavy and injury-shortened roster has caused in 40+ games, the biggest and consistently most noticeable is the gap in the 2nd spot and the problems on the back end of that get caused by Robinson Cano hitting there.

Cano has spent the bulk of his time hitting 2nd this season, and in 94 ABs there he's posted a .362/.406/.681 slash with 16 XBH, 16 R, and 22 RBI.  The 77 non-Cano ABs from the 2nd spot have resulted in just 14 total hits (3 for XB), 7 R, and 4 RBI.  Those results aren't surprising when you consider that it's been the Nixes, Ichiros, and (yeesh) Franciscos of the world occupying the spot, nor is the frustration that comes with having to watch those guys hit there.  Based on some recent roster additions, there might be some upgrade options available and opportunities to bump Cano back down and lengthen the lineup a bit.  Options like ...

Yesterday's rainout was a bummer in that it didn't give the Yankees a chance to sweep Toronto again and extend their division lead.  In the context of their current rotation situation and the always-important big picture, however, it could have been a blessing in disguise.

Andy Pettitte's spot in the rotation was scheduled to come up in this series against Baltimore, and the recalled Vidal Nuno was the likely candidate to make that start.  Because of yesterday's postponement, Joe announced that he will push the rest of his rotation back a day and go with CC, Hughes, and Kuroda in this series.  The team has a scheduled off-day on Thursday, with David Phelps getting the start Friday in Tampa and then CC and Phil cycling around again after him.  Pettitte/Nuno's spot would not come up again until May 28th, which would put Andy in a position to only miss 1 start if his back issue turns out to be as minor as the teams says and he comes off the DL as scheduled.

Andy missing any time is a loss for the rotation, there's no way around that.  But to have that loss minimized is another small silver lining to a bad situation.  It's not the first time something lucky like this has cropped up in a larger, unluckier circumstance.  Just another strange occurrence in a season full of them.