I don't know about y'all, but for me the off day for the Yankees came at the perfect time yesterday.  My nerves were already shot from the nature of the losses they were taking, the continued injury problems, and the overall team slump.  It was all starting to affect my mood, even at work where I'm already pretty unlikeable and unpleasant to be around for the majority of the time.  So as a fan, to get a day off to unwind and put everything behind me was much-needed, as I'm sure it was for the team.  A new series starts tonight against the Mariners, and it sounds like there's an outside chance that Teix could be back in the lineup tonight.  That would be clutch, and another positive step towards turning this recent slump around.  Now onto the links!

- On Tuesday, Matt Keegan of Pinstripe Alley had an awesome post on David Phelps' pitch sequencing and how he's used it to his advantage.  Sequencing has been a point of contention for almost everybody when talking about Phil Hughes; nice to see Phelps already showing signs of getting it when it comes to that part of pitching.

- On Wednesday, William Juliano of The Captain's Blog broke down the benefits of adding Casey McGehee, both in terms of helping boost the Yankees' ability to hit lefties and strengthening the bench.

- Chris Carelli of Yanks Go Yard picked apart Ivan Nova's 2012 monthly splits to show how Nova's performance this season hasn't lived up to the reputation he built for himself in 2011.

- Steve L. of Was Watching gave his opinion on the job Cash has done and the manner in which he's addressed building the roster recently in response to this season's trade deadline and fan reaction.

- Mike Axisa of RAB looked at Casey McGehee's platoon splits and contact rates to the opposite field to show how McGehee can be a valuable piece for the Yankees while A-Rod is out.

- On Thursday, Mike Eder of TYA continued the McGehee analysis by showing how his contact rates and recent bad BABIP luck could lead to some positive output in his new digs.

- Newest TYA team member Stacey Gotsulias of Aerys Sports took down Ian O'Conner for his POS article on Joba's return, and did it in a much nicer fashion than I did.

- Lisa Swan of Subway Squawkers had some suggestions for new Joba Rules to keep Joba healthy and productive.

- William Tasker of IIATMS put Derek Jeter's and Robinson Cano's offensive production into context, against both their present-day positional counterparts and past Yankee middle infielders, as a reminder of just how great they are.

- Fishjam25 of Yankees Fans Unite looked at some of Curtis Granderson's monthly trends, specifically his K rate, and gave his opinion on the continued increase in Curtis' 3 true outcome results.

- Jesse Schindler of Bleeding Yankee Blue compared the 3 leading candidates in the AL MVP race and weighed in on where he thinks Cano fits into that race.

- On Friday, el duque of It Is High... gave his realistic, and slightly pessimistic, view of what Ichiro can do and suggested what he should start to do as a member of the Yankees.

- Chris Barca of Bronx Baseball Daily handed out his Yankee report card grades for the month of July.

For the Friday Jam, we're going with a track from the new Childish Gambino mixtape "Royalty," which I highly recommend to anyone who hasn't heard it yet.  This song, "American Royalty," features both RZA from Wu-Tang and Hypnotic Brass Orchestra and is super-funky dope freshness to the max, if I do say so myself. 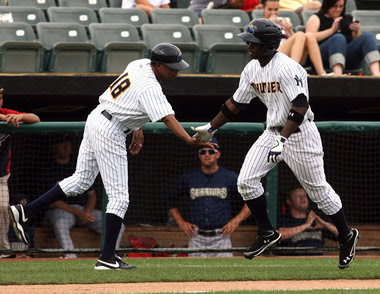 Now that the younglings have been covered and we have the benefit of an off-day yesterday for the Yankees, let's use this morning to finish up the MiL reports for July for the upper levels of the system.  These teams saw a lot of roster movement over the past month, with promotions from the lower levels, demotions from the higher ones, and continued injury problems necessitating some player juggling.  There were some big pitching performances last month, the best ones coming from High-A Tampa, and there were also some guys who swung the bat incredibly well, 3 guys in Trenton in particular.  Which guys did what?  And how'd your favorite prospect handle his business last month?  Find out after the jump.
Read more »
Posted by Unknown at 7:43 AM No comments: