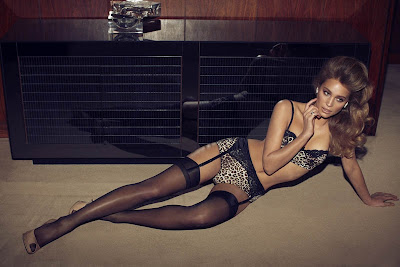 Forget everything I just said.  The Captain's still got it, baby!  No wonder he's been on a hot streak at the plate lately.  I'd be giving it my all during every at-bat too if I knew I was going out for dinner and a nightcap with this lady every night.  Actually, who am I kidding?  I would piss my pants twice if I ever even bumped into Hannah Davis on the street.  That's why Derek Jeter is Derek Jeter and I'm writing this post from my office cubicle right now.  Kudos to you, Captain.  38 years old, still batting .300 on the field, and still batting 1.000 off of it.  Well done indeed, sir.

Now somebody do me a favor and hit the fucking music!

P.S.- I wonder what she gets in her gift basket when she leaves.
Posted by Unknown at 12:21 PM