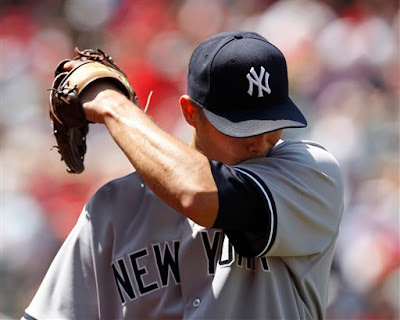 - If you're keeping score at home, that's now 8 multi-hit games for Bob Cano already this year after his 4-5 job yesterday.  Dude has been stinging the ball since Spring Training and it hasn't stopped.

- The Human Take Sign, Nick Johnson, was out of the lineup with a sketchy back yesterday and now he's going to be out until Tuesday as a precaution.  The injury doesn't sound like it's enough to warrant getting the Jesus Watch up to threat-level orange, but you never know...

- Frankie Cervelli, in addition to being everyone's favorite neighborhood catcher, has been quietly holding his own and then some at the plate in his limited appearances so far this year.  After yesterday he's now 6-12 on the season with 5 RBIs.  He's had a hit in every game he's started and an RBI and 3 of the 4.

- Oh look!  Brett Gardner is hitting .340 on the year after 3 more hits yesterday.  Between Gardner's improvement at the plate early in the season and Marcus Thames being a lefty hitman, the Yanks should just cut Randy Winn right now and call up somebody from Triple-A to be the 5th outfielder.

- Javy goes up against retired Yankee killer Scott Kazmir today in the battle of struggling starters trying to get their shit together.  Let's see if he can get that fastball up over 90MPH today.

- If you're filling out your scorecard for the game today, here's the starting lineup:

- No Linkapalooza today because quite frankly, I'm just too hung over and lazy to pull all the links together.  But I will plug LoHud, River Avenue Blues, and The Yankee U again as the best in the business when it comes to Yankee coverage.  So go to those sites and get some knowledge.

And just because I'm a nice guy, I'll put up this classic video of a turtle fucking a shoe.  It's a visual metaphor for what Andy did to the Angels yesterday.  Guess which one was the shoe?

Enjoy the rest of your weekend, Yankee fans.
Posted by Unknown at 1:45 PM No comments: 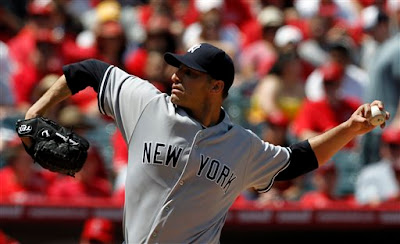 Andy was brilliant again yesterday, to the tune of 8IP, 6H, 1ER, 6K and 0BB as he picked up his 3rd win of the season, lowered his ERA to something that normal numeric fractions can't calculate, and set the Yankees up to win their 6th consecutive series of the year today is Javy can grow a little hair on his peaches.

The Yanks also roughed up Joel Pineiro yesterday, something they were unable to do in their meeting with him last week.  Although with the way Andy was dealing yesterday, they would have only needed a few hits and walks here and there to get the job done.

We haven't done this in a while so... START SPREADING THE NEWS, MOTHER F'S!!!!