Yanks Continue To Shuffle The Rotation

Today is the Yankees' first scheduled off-day in over 2 weeks.  They've played 16 games in 16 days and get a chance to catch their breath before a weekend series in Tampa that kicks off another stretch of 17 games in as many days.  With that extra day to play with and an open spot in the rotation, Joe has decided to juggle the order again for the next turn through.

David Phelps will get the start on Friday night against the Rays, with Vidal Nuno slotting into Andy Pettitte's spot on Saturday.  This pushes CC Sabathia, Phil Hughes, and Hiroki Kuroda all back and gives each an extra day of rest before their next starts.  For Sabathia and Kuroda this is a safe move and a smart move, especially for Kuroda, who sounded determined to make his next start after leaving last night's game early.  For Hughes, who's been struggling with his fastball command lately, who knows what kind of impact the extra day will have?

There's still no word on when Pettitte will be ready to return to the rotation.  Per Chad Jennings, he's scheduled to throw either today or tomorrow and is eligible to come off the DL on July 1st.  The Yankees will wait to see how he comes through the throwing session before making any plans, but in the meantime it's a wise move on their part to give their other 2 veteran starters a little extra rest when they can.
Posted by Unknown at 10:23 AM 2 comments: 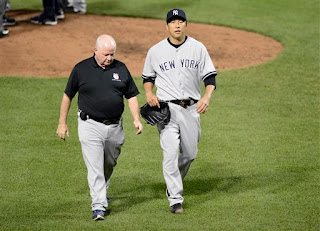