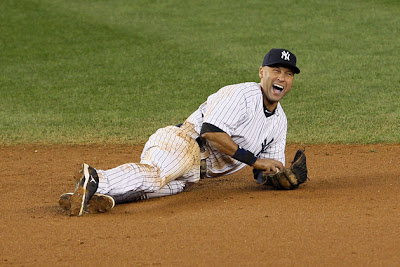 The immediate impact of Derek Jeter’s ankle injury was major and painfully obvious to anybody who watched the ALCS. Without him in the lineup or on the field, the Yankees managed to score just 2 runs in the final 3 games while giving up more than that and committing 3 official defensive errors, 5 if you want to be a stickler like me and give Chavez and Teix Es for their stay-back botches in Game 4.  Even deeper than the on-field results, the entire attitude and morale of the team seemed to drop without the presence of The Captain. Say what you want about his robotic repetition of nothing comments to the media, but the tired, lifeless nature of the Yankees’ play in the final 3 games should stand as an example of just what kind of behind-the-scenes leader Jeter is in the clubhouse and how important he still is to the Yankees’ success. Losing Jeter for this year’s ALCS was a big enough blow to the Yankees, but the impact this injury has on next season could be even greater.
Read more »
Posted by Unknown at 1:00 PM No comments: 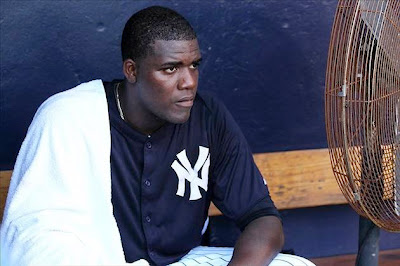 Hey, remember that big trade the Yankees made in January?  They sent their best prospect to Seattle for a couple of young pitchers.  One of them was supposed to be this 22-year-old stud who the Yanks could pair up with CC Sabathia to form a top flight 1-2 punch for the next 4-5 years.  I think his name was Pineda?  Michael Pineda?  That's him, right?  Yeah, well if you remember him you probably also remember that he had surgery to repair a torn labrum in his pitching shoulder and missed the entire 2012 season.  Reports from Brian Cashman this past weekend have Pineda missing at least the first couple months of next season as well, so don't expect to see him as an option for the 2013 rotation, at least not right off the bat.
Read more »
Posted by Unknown at 9:00 AM No comments: