The Captain has had his walking boot off for a while now, and has been working out at the team complex in Tampa hitting in the cage and taking groundballs for the last 2 weeks.  Last Monday, Erik Boland reported that Jeter would begin running when everybody reported to camp "in a few weeks," and now it appears that schedule has been slightly accelerated.  Boland tweeted this morning that Jeter ran for the first time since his surgery and told reporters he had been given the "green light" to start intensifying his workouts.

This should be a positive sign that things continue to be right on schedule with respect to Jeter's rehab program, and to a certain degree it is.  But Jon Morosi's follow-up tweet stating that Jeter only ran on a treadmill does cause me to rein in my excitement a bit.  I was skeptical about the prospect of Jeter making it back for Opening Day when his early progress was reported by Joe last November, and this latest report does little to change my feelings.  Running on a treadmill and running on a baseball field are two completely different things, and as a shortstop who also hits leadoff, Jeter has to do quite a bit of on-field running.  If all he can do right now is take light swings and jog on a treadmill, he's still a long way away from being back in game shape.  He's still got 7 weeks to get there, but that may not be enough to be completely ready for Opening Day if he still isn't physically able to put multiple baseball activities together.

Regardless of whether or not Jeter was able to go Opening Day, the Yankees were going to have to handle him carefully for the first few weeks of the regular season.  That plan may have to include contingencies for how they want to handle the SS position if Jeter isn't ready to go, because to rush his comeback would be insanely unwise.  Hopefully Eduardo Nunez has been taking a lot of grounders this offseason...
Posted by Unknown at 12:21 PM 1 comment: 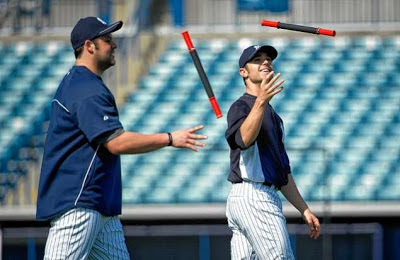