Maurice Jones-Drew, clearly inspired by my poking fun at the new Jaguars' uniforms, ran wild on the Texans yesterday to the tune of 119 yards and 3 TDs as Jacksonville finally got off the schnide and proved just how valuable those new jerseys are. For the third straight year, Houston looks destined to underachieve after being anointed the next team to "make the leap." Maybe they should think about changing their uniforms because clearly the ones they have now are holding them back.

After another thorough ass pounding, it was announced by the NFL that Cleveland head coach Eric Mangini can no longer be referenced as being a part of Bill Belichick's coaching tree. The Brady Quinn experiment seems over after he was pulled for Derek Anderson, but with Anderson tossing 3 picks in relief as the team put up a lackluster 186 yards of total offense, it's anybody's guess as to who will start for the Browns next week. This is the 2nd game in a row that they failed to score a TD, which gives them a grand total of 1 in their last 9 games dating back to last year. After setting the bar this low, anything next week would be considered an improvement.

Raheem Morris took time out of his post-game press conference yesterday to call Eric Mangini and ask if they could help each other update their resumes as his Bucs continued their trip back in time to the glory days of Tampa in the 70s and 80s. The Giants running attack came out of hiding to the tune of 196 combined yards by Brandon Jacobs and Ahmad Bradshaw. While it might not help them make the playoffs, I for one would be impressed to find out that Tampa is actually playing this bad because they're all going as the 1979 Bucs for Halloween.

Larry Johnson tightened his grip on the lead for this year's "Shaun Alexander Former Top-5 Running Back Who Has Clearly Lost It" Award with a 19-carry, 38-yard clunker in the Chiefs' loss to Philadelphia. The Eagles didn't miss a beat without Donovan McNabb and Brian Westbrook as Kevin Kolb and rookie RB LeSean McCoy continued to impress. Mike Vick's debut was hardly worth mentioning, but hey, at least he didn't flick off the fans, get arrested for marijuana possession, or murder any dogs in the process.

Mark Sanchez turns in another solid performance and the Jets are now 3-0. At the rate he's going, Sanchez will achieve Joe Namath-like status in New York some time around Week 7. He's certainly already reached that status with the ladies of NYC and probably has the VD to prove it. With the loss, Tennessee now falls to 0-3 and is already all but eliminated from the playoffs with the Colts sitting at 3-0, although I think they should be concerned with the fact that the throwbacks their staff was wearing yesterday made them look more like 5-year-olds getting ready for bed in their daddy's t-shirt than NFL coaches. 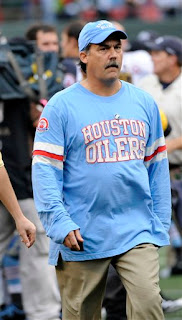 A week after everyone was ready to hit the panic button, New England rebounded to upend one of the top teams in the NFC. Who knew that all their problems could be fixed by re-establishing the running game, protecting their quarterback, and playing a little defense? It's that kind of advanced football knowledge that makes Bill Belichick the genius that he is. Sure Brady looked rustier than the Titanic, but if the Pats can continue to win with this formula that should give him ample time to get back to hitting on all cylinders.

Nothing snappy or sarcastic to say about Favre this week; the guy showed that he's still got a little wick left in the candle as he pulled a win out of his old ass for the Vikes on his last-second heave to Greg Lewis. What made the performance even more vintage was the underwhelming performance leading up to it and the pedestrian 52% completion percentage for the game. I've watched Favre win enough early-season games that don't matter to know it's only a matter of time before those prayer passes start falling into the arms of opposing players.

Green Bay rediscovers their defense and Aaron Rodgers puts up Madden football numbers (269 yards and 2TDs on just 13 completions) to lead Green Bay to a much-needed victory over the St. Louis Ewes. Kyle Boller's less-than-terrible job replacing the injured Mark Bulger may lead to a "crappy quarterback controversy" in St. Louis as they decide which guy they want leading them to a 2-14 finish this year.

Despite playing fairly well in helping his team break a 19-game losing streak, Matt Stafford already seems destined to play bridesmaid to Mark Sanchez's bride in the QB Class of 2009. That being said, congrats to the Lions on getting their first win in years and condolences to Jim Zorn for being the first coach fired this year. Seriously, that's not even a joke; I'm pretty sure all coaches have the "losing to the Lions is grounds for immediate termination of said contract" clause written into their contracts. Things are so bad in D.C. right now that Clinton Portis is planning on wearing a paper bag over his head for his costume this week.

Jamarcus Russell continues to put up comically bad numbers for the even more comically bad Raiders. I think I threw for more yards in my Pee Wee football career than he has in his NFL career. Somehow the Broncos keep winning despite having a below-average offense. But Brandon Marshall did show up this week and score a touchdown, providing some light for the passing game, and he managed to do so without punching or strangling his fiancée.

The Super Bowl hangover has officially hit the Steelers and it's more contagious than swine flu right now. Some players were seen wearing surgical masks as they left the locker room after yesterday's heart-breaking loss. After trying to establish their long-lost running game 2 weeks in a row and losing, the Steelers might be better off just scrapping the run game altogether and keeping Rashard Mendenhall as the only back on the roster to block for Roethlisberger in blitz situations.

Pierre Thomas seemed to forget what team he played for yesterday as he gashed Buffalo for 100+ yards and 2TDs but denied Drew Brees the chance to shred Buffalo's secondary in the process. After a dismal 16-29, 172 yard, 0TD performance, Brees was left to shake his head and wonder what went wrong. The question for New Orleans now has to be how long will they let Brees keep his spot as the starting QB if he continues to put up unimpressive numbers like this in dominating wins? How long do they let it go before they make a change? 4-0? 5-0? 7-0?? Only time will tell.

On the bad side, Miami is starting to realize that they can't win games solely with the Wildcat offense. On the worse side, they have been exposed as not having any talent at the WR position, something that usually helps teams score more points. On the worst side, they found out that 2 Chads aren't necessarily better than one as Henne was putrid in replacing the injured Pennington. It might be time to go back to drawing board and find a way to get 2 balls and a 3rd running back into the offense.

Jay Cutler's 2nd straight comeback win-leading performance has almost completely erased memories of his Week 1 bed-shitting incident against Green Bay. In fact, he played so well yesterday that his Mommy and Daddy bought him front row tickets to the next Dashboard Confessional concert as a present. TJ Houshmandzadeh's week of trash talking and 4 quarters of 4-catch, 35-yard football got him a heaping helping of crow to eat after the game, prepared any way he wanted by Lance Briggs.

Peyton Manning is the best quarterback in the NFL, point, game, match, end of story. To do what he's doing with a group of wide receivers so unknown that you can't even sign them as free agents in Madden is beyond belief, even more so when you see that he's still getting Dallas Clark and Reggie Wayne enough balls for them to put up Pro Bowl numbers. Arizona's offensive line will spend the next week working on learning how to block against an inside spin move and a swim move after Indy's defensive ends put on a clinic against them last night.

In a game matching up 2 teams who have fantastic 1-2 RB tag teams, marginal WR depth, and inconsistent defenses, this game will obviously come down to quarterback play. And when those 2 QBs are Tony Romo and Jake Delhomme, it basically comes down to which quarterback will suck less. Whichever one of those 2 can play less poorly than the other will find his team on the winning side. Given the score I picked, I'm betting Romo will find a way to do just less than Delhomme to lose the game for his team, who will find a way to eek out a win despite Romo's worst efforts.


MNF Predictions for the season (winners): 3-0

MNF Predictions for the season (being even remotely close to getting the score right): 1-2
Posted by Unknown at 3:01 PM No comments: