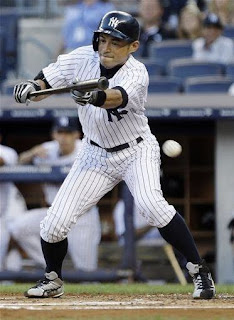 (Smart play or wasted opportunity?  Courtesy of the AP)

There's perhaps no play in baseball that further divides old school fans and analysts from the more sabermetrically-inclined new school crew than the sacrifice bunt.  What one calls a gritty, smart "baseball play," the other calls pointless and a waste of a perfectly good out.  Personally, I've always been on the new school side.  I just don't like the idea of giving up outs and killing chances for a potentially bigger inning by sacrificing one.  I can, however, see the value in a sac bunt in certain situations or at certain times in certain games, and that's why I'm not sure how I feel about Joe bringing it back this weekend.  Joe has used the sac bunt a time or 2 in the past, usually in situations that left more people scratching their heads than clapping their hands.  Against the Orioles, he damn near featured it as the focal part of the Yankee offense.

Yanks Bench Could Still Use Some Work

The Yankees addressed a serious need yesterday by claiming Travis Ishikawa off waivers from the Orioles.  Ishikawa should immediately assume the role as designated lefty bench bat, a role the Yankees haven't been able to fill for the past few weeks and one that they could have put to great use at least a handful of times last week.  They were back up to 4 available bench players again after Eduardo Nunez took David Phelps' spot on the active roster this weekend, but all 4 of those players were right-handed and severely below-average hitters.  The anticipated replacement of David Adams with Ishikawa does bring a little balance back to the bench lineup.  It's not the final move the Yanks should make if they're looking to add even more bench flexibility. 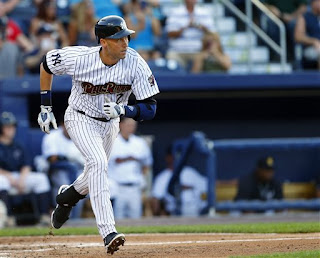 (Dude looks good in every uni.  Courtesy of the AP)

Another day, another pair of Minor League rehab outings for Derek Jeter and Alex Rodriguez yesterday.

Jeter- Went 1-2 with a groundball single, 2 BB, and 1 strikeout playing the full game at DH.  The plan was originally for a rest day today, but Donnie Collins reported yesterday afternoon that Jeter will start at shortstop again tonight.

A-Rod- Went 0-3 in 8 innings as the DH for High-A Tampa.  No official word from the team on where and when he'll play again.  Given how long he's been out and the slow approach being taken with him so far, there's little reason to expect anything other than him continuing to play for Tampa for now.

In case you missed it, Michael Pineda was officially activated from the 60-day DL yesterday and assigned to Triple-A where he's scheduled to start again on Thursday.  He should be down there for a couple weeks to fully stretch out his pitch count and to "buy back" the year of free agency that was lost last season.

He's not the right-handed platoon bat the Yankees could use for Lyle Overbay at first base, but Travis Ishikawa can and will be the lefty bench bat this team definitely needs right now after the Yankees claimed him off waivers from Baltimore yesterday.

Ishikawa had just 2 singles and 8 strikeouts in 18 PA for the O's this season, making him a very expendable piece for them.  His .316/.413/.525 line he was putting up in 208 Triple-A PA and career .260/.324/.399 Major League batting line are more telling about what he's capable of bringing to the Yankee bench.  Ishikawa is a useful left-handed hitter with just enough power and just enough patience to make him dangerous playing with a short porch in right.  He's also a plus defender at first base, so he can be used to rest Lyle Overbay without losing much defensively.  His primary duty will be as a left-handed pinch hitter - a role the Yankees really needed to fill with their surplus of light-hitting righty left infield bats - and his career .739 OPS and .322 wOBA against RHP makes him viable in that role.

Ishikawa is another in the long line of small, marginal upgrades the Yanks have tried to make to this roster as the season has gone on.  He likely won't be a world beater, but he will be a better late-game hitting option than Stewart or Cruz or Gonzalez if the Yankees need a run.  I'd expect David Adams to be sent down to clear a spot for Ishikawa and I expect that move will happen later today.
Posted by Unknown at 7:41 AM No comments: