Is Brandon Laird Going To Play?

Seriously, what's the deal?  Does Joe just hate young players or something?  It's bad enough he's got Hector Noesi rotting away in the bullpen while he brings Boone Logan in to pitch to multiple right-handed batters, but now we have to continue to watch Nunez flub the ball all over the field or Ramiro Pena flat out suck in general instead of giving Laird a chance to play?

At worst, it's reasonable to expect that Laird can hit much better than Pena and maybe as well as Nunez.  He's rocking a .266/.296/.412 line in Triple-A for the season, and those numbers have been much better over the last couple months after an atrocious April.  Nunez's MaL career line is barely over that (.256/.307/.380 in 217 plate appearances), and Laird hits for much more power.  And while he won't win any Gold Gloves at 3rd, I don't see Laird flubbing as many balls or making as many bad throws as Nunez.  So if he was called up, and there are this many things he can do as well if not better than the other 2 IF guys, why isn't he playing?  Is whatever he's learning being in the locker room and on the bench with the Major League Squad really that much more valuable than what he would do playing every day at SWB or at least getting some ABs and time in the field in the Majors?  Fuck and no.

Give the kid a shot, Joe.  You already know what Pena is going to give you, and Eddie Nune has shown what his value is as an everyday player (not that great, as evidenced by his -0.4 WAR on the season).  I'm not saying Brandon Laird is going to make us all forget about Alex Rodriguez, but doesn't he deserve a shot?  He brings more to the table offensively, which could be a help to the struggling O, and won't take as much off of it defensively.  He better see some time this weekend, period.
Posted by Unknown at 2:58 PM No comments: 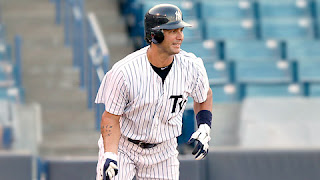 The return of Phil Hughes and soon to be returning Rafael Soriano have and will help bolster the Yankees' pitching depth down the stretch and possibly lessen the need for them to make a big deal for an arm before the deadline.  With the offense continuing to sputter, the return of Chavez could mean the same thing for the lineup.  It's fair to say that the Bombers could definitely use another bat out there right now, and if they can add that bat internally, I'm all for it.  He shouldn't be playing every single day, since he is made of glass and all, but Eric Chavez should be used as much as possible when he comes back to help rebound from this recent offensive drought.
Posted by Unknown at 7:53 AM No comments: