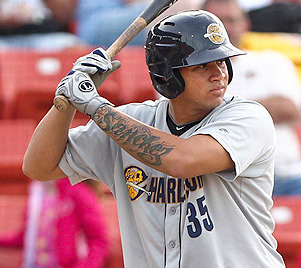 On Wednesday afternoon, Jonathan Mayo of MLB.com released his "Prospect Watch" top 10 catching prospects rankings.  Top Yankee prospect Gary Sanchez was 3rd in those rankings, behind Travis d'Arnaud of the Mets and Mike Zunino of the Mariners.  Seeing as those 2 guys are easily the 2 best catching prospects in baseball, that's a pretty big accomplishment for the 20-year-old Sanchez.

Mayo's explanation of his putting Sanchez 3rd included high praise for Sanchez's defensive skills, saying he had the potential to be "an exciting two-way player for the Yankees."  This is higher praise than usual for Sanchez's defense, and that's coming from someone who was pretty complimentary of the improvements Sanchez made in last week's AB4AR Top 30.  Sanchez does have the plus arm, but right now doesn't project to be anything better than average at best behind the plate.  Still, with Sanchez's advanced offensive skills and high ceiling, it makes sense that Mayo would rank him 3rd if he believes Sanchez could be that good defensively.

Sanchez is still years away from the show, but his positional rankings project him in a positive light for the future. Last year MLB.com had Sanchez 4th overall, just ahead of Wilin Rosario of Colorado, who posted a .356 wOBA and hit 28 HR in 117 games for the Rockies in 2012.  Rosario also rated as a very poor defensive catcher according to FanGraphs.  Sanchez has a similar offensive makeup to Rosario, and still has time to improve his defensive skills.  If he can be even slightly better than Rosario defensively and improve his pitch recognition and plate discipline skills, Sanchez could be a very valuable Major League catcher.
Posted by Unknown at 3:26 PM 9 comments:

I mean, I thought everybody knew the definition of the word, but I guess not after the immediate reaction and subsequent over-dramatization and over-coverage of this harmless quote that Cash dropped yesterday when asked about the possibility of A-Rod missing the entire 2013 season:

“I think because (of) the serious nature of the surgery and the condition that he’s trying to recover from, you know, there is that chance.”

Chance  noun  /'chan(t)s - the possibility of a particular outcome in an uncertain situation.

Everybody ready for a quick lesson?