With the herd being thinned out through cuts at Major League camp, the Minor League spring training work has gathered pace over the past few weeks.  With Josh Norris releasing the roster breakdowns yesterday, the pictures are becoming more and more clear for each level of the Yankee farm system, at least to start the season, which makes it as good a time as any to take care of the season previews for each team.  We'll start with the lower levels, the rookie GCL, Short Season Staten Island, and Low-A Charleston, today and finish with the upper levels tomorrow.

The majority of this roster will be filled out by 2012 draft picks, but there are a few names already in the system worth keeping an eye on for the GCL Yankees, including pitchers Jordan Cote and Hayden Sharp.  Some of the Yankees' recent international signings could also make their American professional debuts in the GCL this year, but the most interesting possibility could be Rafael DePaula, the 21-year-old right hander who finally got his US work visa and began his Yankee career with a bullpen session and simulated game this week.  He's got great stuff and an easy release, and talent-wise is probably well suited for a full-season A-ball league.  But with the Yankees having seen very little of him, they could decide to be cautious and send him to the GCL club or Staten Island after he completes his work in Extended Spring Training.

The biggest name amongst the group here will be Ravel Santana, still working his way back from the bad ankle injury that prematurely ended his 2011 debut season.  If he shows no lingering effects of the injury and produces similar to how he was last season, he could be promoted quickly, but there's no reason for the Yankees to rush him.  There is a lot of talent around Santana in the lineup, mainly guys drafted last season who didn't get the promotion to a full-season league like Dante Bichette, Jr. did such as catcher Greg Bird, third baseman Matt Duran, and outfielder Jake Cave.  It will be interesting to see how Bird's playing time is managed with 20-year-old Isaias Tejada and his .443 wOBA from the GCL last season also in the fold.

Up the middle, Staten Island has a pair of prospects who don't get the ink that other Yankee IF prospects do but are definitely worth keeping an eye on in Claudio Custodio and Jose Rosario.  On the mound, the staff will be led by Gabe Encinas and Evan Rutckyj, two names I had just off my AB4AR Top 30 Prospects list, as well as right-handed Taylor Morton.  Rookie Davis and Daniel Camarena are 2 other names to remember.

If you're a prospect hugger then this is where the majority of your attention will be this year.  The River Dogs lineup could sub for a Low-A All Star team minus a few spots, with Gary Sanchez returning to start the season in Charleston as the catcher and Bichette, Jr. and Mason Williams making their full-season debuts at third base and center field respectively.  It will be interesting to see how long Sanchez stays at this level before getting bumped up to Tampa, especially with the Bird-Tejada logjam behind him.  Williams will be flanked by sleeper prospect Ben Gamel in left field and converted third baseman Tyler Austin and his bag of tools in right.  If my biggest mistake in my Top 30 wasn't having Austin all the way down at 30, it might have been leaving second baseman Angelo Gumbs off the list altogether.  He and Cito Culver round out the collection of talented names in the lineup as they look to continue to progress towards becoming the Yankees' double play combo of the future.

On the mound, the stars of the show will be righties Bryan Mitchell, making the jump to a full-season league after 2 years in the system, and Jose Campos, the other piece acquired in the Monter-Pineda trade in January.  Unfortunately, Josh Norris has Evan DeLuca and Matt Tracy penciled in for rehab work to start the season, but eventually both of them should join Mitchell and Campos to make a very talented rotation.  Out of the bullpen, Phil Wetherall and Caleb Cotham are the 2 big names to watch, and don't sleep on Mariel Checo and his stuff.

** Coming up tomorrow- previews for High-A Tampa, Double-A Trenton, and Triple-A Empire State. **
Posted by Unknown at 2:33 PM No comments:

Pineda To The DL With Shoulder Inflammation 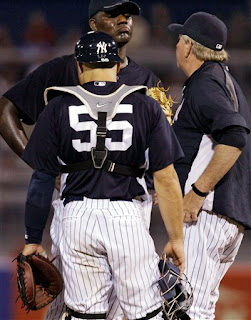 Somehow I don't think this is what Cash had in mind when he made the big trade back in January to bring Michael Pineda to the Bronx.  After a spring full of questions and storylines about Pineda's physical condition and velocity, everything came to a head last night when he failed to make it out of the 3rd inning in his final ST start, allowing 6 earned runs on 10 combined hits and walks and then complaining of soreness in his right shoulder.  Pineda was scheduled for an MRI this morning and multiple beat guys are reporting that the MRI revealed inflammation in the right shoulder.  Now, instead of being the team's #2 starter behind CC, the scenario that Cash and the entire organization surely envisioned when they pulled the trigger on the trade, Pineda will open the season on the DL.

There are already multiple theories coming out on why this happened.  Pineda reportedly didn't work out at all over the winter and came into camp overweight, which certainly could have explained the diminished velocity all spring.  He could have been using spring camp to pitch himself into shape, and Joe commented last night after the game that Pineda's mechanics were different last night, suggesting he was trying to overthrow to add velocity.  Both Cash and Joe said last night that they have asked Pineda multiple times during ST if his arm felt alright and every time he said it was fine, until last night.  There's no way to know for sure how long his shoulder had been bothering him, but it's not unreasonable to think that Pineda was trying to push through the injury knowing he was in a competition for a rotation spot this spring.

To be honest, I really don't know how I feel about all of this right now.  I've been one of the biggest Pineda supporters this spring, constantly banging the "don't worry about his velocity, he's pitching fine" drum and preaching patience with the kid and now this happens.  All the comparisons to Phil Hughes' 2011 that I've been trying to brush aside now look far more realistic and I can't help but question if this entire season will end up being a wash for Pineda much like 2011 was for Hughes.

I'm surprised that the Yankees didn't do their due diligence in checking on what Pineda had been doing during the offseason to prepare when they were discussing the trade, and would be even more surprised if they did check and still decided to make the trade anyway.  That would go against everything the organization stands for when evaluating players.  At the same time, I'm relieved that all the MRI showed was inflammation, and Pineda will only be on the 15-day DL instead of the 60-day.  At his age, and with his upside, this is not the end of the world and the Yankees can still come out in the positive on the trade if Pineda can fully recover and get in better shape.

No matter where you stood on Pineda this spring, almost everybody was in agreement that the Yankees' surplus of pitching depth was a good problem to have and this latest development proves why.  They lose a potentially dominant piece of the rotation but are still covered with CC, Kuroda, Nova, Hughes, and Freddy to open the season, with Andy waiting in the wings.  That being said, it's still disappointing that a trade for what should have been a #2 starter and key piece of the rotation for the long-term future has resulted in these negative early returns.
Posted by Unknown at 10:50 AM No comments: