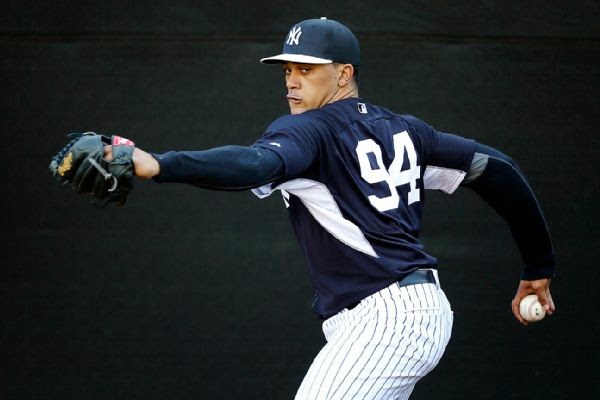 Another Day Of Firsts For Nuno Today

Vidal Nuno will make his second start in place of the injured Ivan Nova this afternoon against the Angels.  It will be his second start at Yankee Stadium in his short Major League career and his first afternoon start.  It will also be the first time he's faced the Angels and their big hitters like Albert Pujols and Mike Trout, a frightening thought for a young pitcher, but keep this in mind.  On the other side of the matchup, it's the first time for them and the rest of the LA lineup against Nuno.

The Angels no doubt have their scouting reports and video on Nuno to prepare themselves for today's game, but Nuno may have a slight advantage in this first time matchup.  As a pitcher who throws a lot of different pitches and a lot of offspeed stuff, he gives opposing hitters plenty to think about up there.  They don't know his tendencies and they don't know what the ball looks like coming out of his hand.  He played that to his advantage very well last Sunday when he tossed 5 shutout innings against the Rays.  If he's commanding his stuff, maybe he can do it again.

Expect a healthy helping of sliders, 4-seamers, curveballs, and sinkers today, and maybe a changeup or 2 for good measure.  Don't expect to see high velocity, but hopefully the mixing of pitches and lack of familiarity will help Nuno help his team even up this series.

This one wasn't pretty.  Getting destroyed by a dozen at home is not the way to open a weekend series.

- Hirok was horrendous last night.  Couldn't locate anything and the Angels tuned him up for 8 runs on 10 hits in 4.2 IP.

- No offense to help him against C.J. Wilson.  Brett Garder was the only player with multiple hits, Carlos Beltran had the only XBH, and the only run scored on a sac fly in the 6th.

- Bruce Billings took one for the team with 4 innings of long relief.  He gave up 4 more runs.

- Yanks need a better showing this afternoon when Vidal Nuno and Hector Santiago get the start.
Posted by Unknown at 6:38 AM No comments: